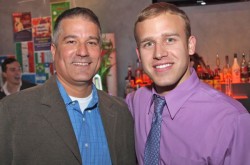 If you were looking for influencers in Atlanta’s diverse gay community, a chunk of them were collected in the colorful confines of an Italian restaurant in Midtown on Thursday.

There were politicos, media types, non-profit leaders, activists, business folks, artsy types and drag queens. All on hand at Piola for a cocktail reception to celebrate their inclusion in the Fenuxe 50, the magazine’s list of what it calls the most prominent and influential members of Atlanta’s LGBT community.

Readers helped nominate and vote for the Fenuxe 50, which were culled from a group of 70 suggestions. Fenuxe describes the list like this: 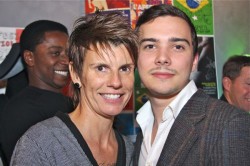 Each person on the Fenuxe 50 list has used their own diverse and unique talents to benefit our community. Although these individuals could never do it alone (and there are thousands more who deserve recognition) these are the top movers and shakers of the Atlanta LGBT community that you have chosen to be recognized for their important contributions to the community this year.

Whether it is from inside the chambers of the State Capital, the conference room of one of Atlanta’s many non-profit groups, or working tirelessly behind the scenes—these individuals have made a difference for our community. They represent the best that Atlanta has to offer and their contributions are as diverse as Atlanta’s thriving LGBT community. 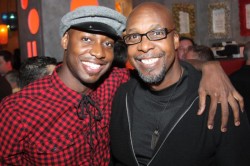 The list of notables with Q&A interviews with each debuts in the magazine’s Nov. 4 issue, so Tyler Calkins and William Duffee-Bruan (top photo right) – the duo that launched the gay glossy in April – decided to throw a soiree to celebrate. Most of the Fenuxe 50 was on hand, from politico Ken Britt to DJ Vicki Powell (second photo), AID Atlanta’s Tracy Elliott and media types including our own Matt Hennie, the GA Voice’s Laura Douglas-Brown, Carma’s Thomas Ryan and Henry Scott from Creative Loafing.