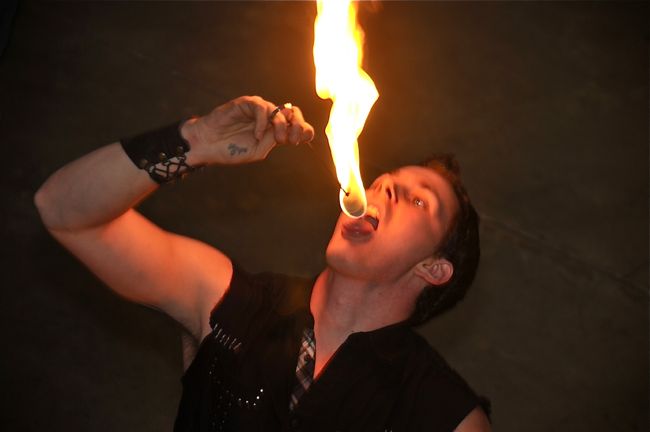 Guests clamored for tickets to Friday’s Fire Party, a swanky celebration of Fenuxe magazine’s one-year anniversary, to get a load of fire breathers, performers, complimentary cocktails, and a silent auction.

Dodging fire blowback (top photo), partying amid the works of Bill Lowe Gallery’s current exhibition, and hobnobbing with the likes of Diamond Lil and Mary Edith Pitts—adding couture to her camp since her sudden departure from Burkhart’s (second photo)—the festive masses also enjoyed other electrifying performers during the event.

The gay glossy’s first year has been a welcome addition to Atlanta’s LGBT media scene as well as its social scene. In February, the Gay Bachelors issue inspired a party (photos) to benefit AID Atlanta, the magazine toasted its 50 Power Brokers (photos) in November, and the Launch Party (photos) in July after getting a few issues under its belt also drew a packed house.

It’s hard to believe that it’s already been a year since partners Tyler Calkins and William Duffee-Braun first introduced Fenuxe to Atlanta readers in the 2010 flurry of new LGBT publications after the collapse of Window Media’s versions of Southern Voice and David in November 2009.

Keeping up the party pace on Friday, gourmet hors d’oeuvres and multiple bars were peppered throughout the gallery to make sure no hand was empty, and a spread of silent auction items kept the crowd flowing. All proceeds from the auction benefited the Atlanta Pride Committee.