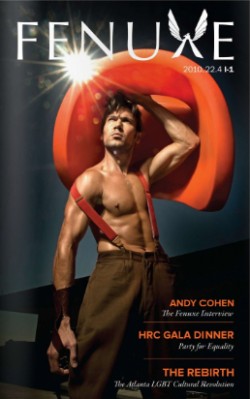 F is for Fenuxe and Fashion, at least if you’re the publishers of a sleek new biweekly magazine aimed at the upscale gays in metro Atlanta.

The first issue hit the streets on Thursday, adding an interesting twist to the now-crowded Atlanta gay media scene. With Fenuxe, the roster of LGBT print publications grows to five — Pocket Rocket, David, Fenuxe, Southern Voice, GA Voice — and six if you factor in the informal monthly Don’t Label it!

The 48-page debut issue of Fenuxe — the title of which is an acronym for the magazine’s promise of fashion, events and entertainment, nightlife, urban culture, x-plore (travel) and eats-oriented content — makes a strong pitch for the well-heeled niche of Atlanta’s large LGBT market. Besides a slick and cohesive design, it offers content that includes a travel piece on Dubai, a look at Buckhead’s Seasons 52, how to shop in a homogay sort of way, a piece on fashionista Jeremy Wiborg and a seven-page fashion spread. (F is for Fenuxe and fashion, remember.)

There’s also the usual, popular offerings of other glossies in Atlanta: two pages of bar pics, a horoscope, bar map and an event preview, this one on the upcoming 2010 Atlanta HRC Gala Dinner & Auction.

But Fenuxe brings some new features to the media scene: A clever Top 10, which in this issue offers ways to start fresh that works in mentions of local businesses and groups, factoids from Atlanta’s LGBT history so you can impress that smarty you’re trying to snag in the bar, and — our favorite — a crossword puzzle built around Atlanta people, places and hotspots. There’s also Ask Mary, a tongue-in-cheek advice column.

Fenuxe brings with it the aggressive goal of its founders, who talked with Project Q Atlanta last week as they readied for their debut. The first issue had a print run of 20,000 copies and promised a readership of 70,000 people – both numbers larger than any LGBT print product in Atlanta has enjoyed for years. (Before they stopped publishing under Window Media last November, Southern Voice offered a print run of about 16,000 — down more than half from the late ’90s — and David offered 10,000, also down from its highs of several years ago.)

For those keeping score, let’s recap how the gay media scene in Atlanta has expanded in the last several weeks: Fenuxe launches on April 22, Gaydar’s Southern Voice on April 16, the GA Voice on March 19 and Gaydar’s David magazine on March 10. All of that was made possible by the Nov. 16 collapse of Window Media, which meant the shuttering of SoVo, David and a handful of other LGBT publications.

Will there be a shakeout fueled by the faltering economy and reluctant advertisers? Will some pubs emerge victorious, or will they all find a place with readers? We’ll see. In the meantime, it’s fun to watch and chronicle. Best of all, the gay media consumer finally has print options, though there are drastic differences in approaches, feel and competence.