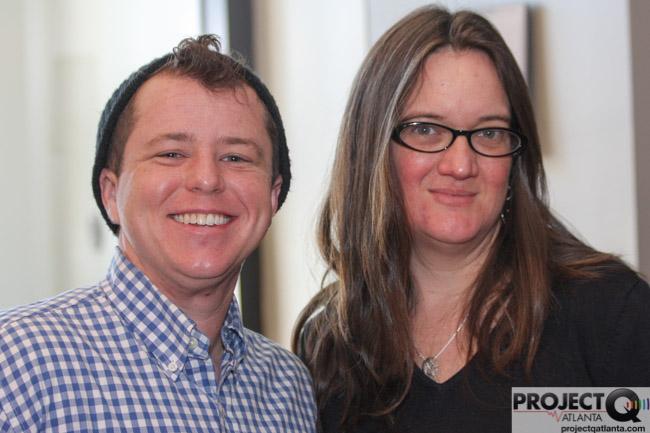 E.R. Anderson (photo left with Charis co-owner Sara Look), executive director of the non-profit Charis Circle, said “the spirit of Little 5 Points is in Charis' DNA.” The bookstore opened on Moreland Avenue in Little Five Points in 1974. They moved one block over to Euclid Avenue in 1994 and have been there since. On April 1, Charis will re-open in a renovated building owned by Agnes Scott College. But not before a closing party on Saturday.

“I hope the neighborhood will remember what we brought to it,” Anderson told Project Q Atlanta. “But there's also much to be said about making a fresh start. We have the opportunity to really finally ensure that Charis will be around for the next 45 years through this partnership with Agnes Scott and that is something we could not pass up.”

The move caps a five-year journey that started with a community listening tour connected to the bookstore’s 40th birthday. As a result of that tour, Anderson said they understood that selling the Little Five Points building and moving was necessary for Charis’ future.

Anderson said the store's new home, inside a historic home built in 1901, “would maintain the homey vibe and character of Charis's ‘purple house’ that so many people associate with us.” Anderson said the “vision and values of the college” are “a natural fit” for Charis.

Since announcing the move in 2016, Charis has been working with Agnes Scott to renovate the structure at 184 South Candler Street. Anderson said the capital campaign generated $250,000 for the project, with donors including Agnes Scott, a handful of family foundations and wealthy donors, and “literally thousands” of Charis fans who donated $10 to $100 each.

“We have lost so many other spaces because people thought that they would just be there,” Anderson said. “It takes a lot of energy and love and money to keep institutions alive and healthy, but when we do as folks have done with this Charis project, it means that Charis is able to exist as a greenhouse for so many other organizations and individuals to launch their ideas and projects.”

Charis will lease the property from Agnes Scott rent free. Anderson said they wanted the new location to mimic the open and inviting feel of the Euclid Avenue store.

“Our guiding words for the design were organic, homey, welcoming and fresh and I think we have achieved that,” Anderson said. “We will have a front porch where people can chat with friends or have a small book club. We're also making plans for a meditation garden with seating under the big magnolia tree in back.”

Ample parking will be available, and a quarter of the store will be dedicated to Agnes Scott school merchandise. A large sliding barn door separates the store from Charis' meeting and programming space.

“This space will allow Charis Circle to double our programming capacity by allowing us to have events throughout the day and night while the bookstore is open,” Anderson said. “We anticipate it will also be a great meeting and hangout space for community members and Agnes Scott students.”

The new location opens on April 1. Charis will host a grand re-opening party on April 27 for Independent Bookstore Day.