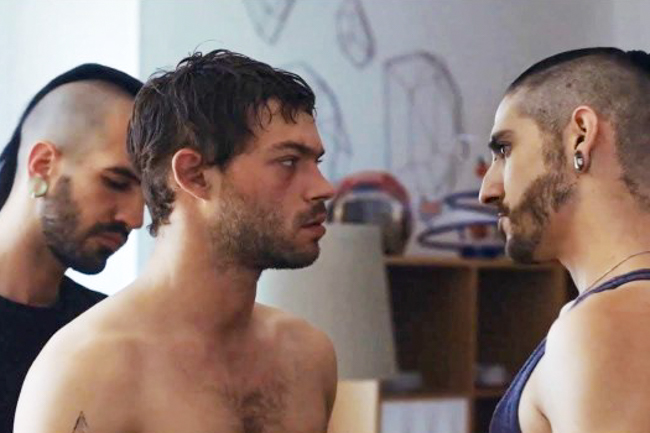 What’s surprising—and exhilarating—about the new filmSauvage(“Wild”) is how it unexpectedly becomes such a stunning character study. In the film, which opens on May 3 in Atlanta, Felix Maritaud stars as Leo, a 22-year-old gay hustler who lives on the streets.

It’s a riveting debut by French director Camille Vidal-Naquet, and it features exceptional work by Maritaud. The actor talks to Q about his experience on the film and how it affected him as a gay man and actor.

“A friend was reading the script and made me meet the director, telling me it was a role for me,” Maritaud says, crediting Vidal-Naquet for making him feel comfortable. “He is really precise as a director and really confident about what he wrote, so it was really good ground to work on.”

The character of Leo piqued Maritaud’s interest. One side of Leo likes the excitement and flexibility of being on the streets, despite health issues and a growing addiction to drugs. Another side of him, however, seems to long for love. He has feelings for a fellow hustler (Eric Bernard) who openly wonders why Leo kisses his customers and shows compassion for them, young and old.

“I describe him as a young guy craving love and freedom — his own freedom,” Maritaud says.

Leo’s life changes when he meets Claude (Philippe Ohrel), who takes him in and offers him a different life.

“I think Claude arrives at a time in the movie when Leo really can’t do it by himself,” Maritaud says. “He is really tired and sick, so Claude may represent this normativity, this place where comfort absorbs freedom for people.”

The director interviewed sex workers in a Paris public park for three years for the project. As part of his own research, Maritaud realized he needed to work on the physicality of Leo.

“To find the character, we worked through dance and through the body,” the actor says. “As Leo uses his body as a tool, I tried to use mine like this, too.”

“It was amazing,” he says. “It’s really comforting to get back that honesty of feeling you put into something.”

The actor, 26, was seen in 2017 as part of the cast of Robin Campillo’s acclaimedBeats Per Minute (BPM), set in the early 1990s as ACT UP Paris activists demanded action from the government and pharmaceutical companies.

As a gay actor, Maritaud is proud to bring three-dimensional LGBTQ characters to life, he tells Q.

“All people on Earth deserve, from movies, the most diverse possibilities to identify with, to create a process of empathy,” he says. “Diversity is so beautiful and that is important to show.”

All dressed up with no place to go? Nu-Uh. It’s nowhere to go and all dressed up anyway!  Hoodies and sweatpants have seen too...
Read more