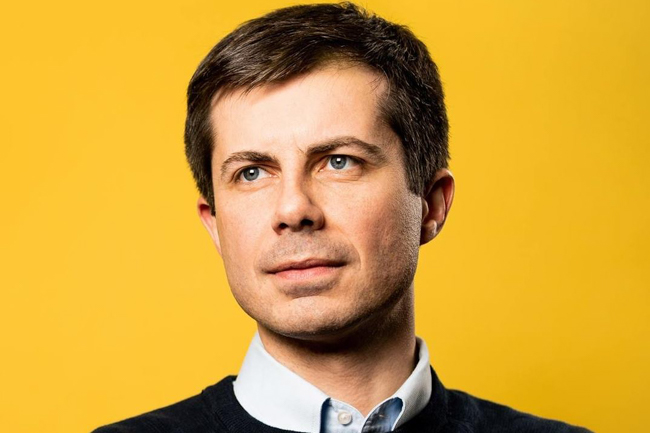 But seriously, out of the 45 men who have been president, at least one of them has touched a dick other than his own and maybe even touched another man’s heart. And there has been at least one first lady that was secretly sappho and ran everything behind the scenes.

But a queer president, now? Right after President Cheeto has brought the federal government to its lowest point in modern history? That does sound about right: Send in the gay couple to spruce the place up, raise property values and upgrade the curb appeal.

I am convinced it was a queer person who invented lemonade, with all the lemons we are given by the straights, historically.

I like Pete Buttigeig. He is intelligent, compassionate and is a proven leader in his role as mayor of South Bend Indiana. His speeches and rhetoric speak to me as a queer person. The idea that he could win the nomination and possibly even the presidency is another thing that I would have never thought would happen in my lifetime. Not in the United States Of America, where it sometimes seems that the only thing all the straight people agree about is how much they don’t like queer people.

Or that they like us, but they don’t get us and we should calm down and enjoy the freedoms we have like marriage equality.

Or that they think they get us, but what they really get is the ones of us that are the most like them, the most gender conforming, the most heteronormative of us who get the pass and the rest of us, well, stay out of their bathrooms and why can’t you be like the other gays?

And I fear that is what Pete represents, the respectable queer, the palatable gay. Here he comes ready to be president, while our community is still trying to redirect a conversation that has for too long focused almost solely on the whitest, most cis, most gender-conforming and heteronormative people.

White cis gays are just beginning to acknowledge and try to understand the issues and experiences of queer people of color, gender nonconforming people and non-heteronormative queers. They, and not surprisingly, straight people are the people in my life who are the most excited about Mayor Pete. They are here for the first gay president and not in the mood to hear anything but praise for him.

The thing they love the most is that he just happens to be gay. It’s not his whole life.

Meanwhile, most of the queers I know are waiting for Pete’s back-in-the-day Grindr profile to drop likes it’s the Mueller report. He met his husband on a dating site, so you know it’s out there. Yeah, I know about Pete’s tax plan, but what is his position on fats and femmes? Was he able to host? Did he display a face pic or was it just torso? I checked his campaign site, and it had none of these crucial details.

Pete also did not come out until he was 33. There is nothing inherently wrong with that, but as a gay man who came out way earlier than that and dealt with down-low and or closeted queer men while I was out, I would like to know how he was when he was closeted.

Was he “trying to be straight,” bless his heart? Or was he a one-and-done, no-real-names kind of guy? Or would he meet someone and form a physical and intimate relationship with them only to break things off when the guy wanted to do other things than just hook up? Did he use these guys for sex and intimacy without any plans to ever come out or having a lasting relationship with them?

I’m not bitter, you are!

When closeted, did he ever say or do anything to an out queer person he regrets now but had to then to maintain his heterosexual facade at the time? This one is important: Often the most dangerous people to visible queers are closeted queer people in positions of power.

From Pete’s interviews and speeches, he seems very credible and intelligent and very, well, butch. I just wish I could see a slip and find out that, underneath all that heteronormative facade, there is a touch of queen.

If I just knew his his drag name — not that he does drag, but every gay man I know has one at the ready, just in case. Mine is Ranch Devereaux.

I mean, Pete said he wanted Phish to play his inauguration and also claims not to do drugs. Honey, pick a lane!

My fear is that Pete is what we will all be measured against in terms of what a valuable queer person is to straight society. If so, he would reaffirm an already existing bias for white, cis-male, masculine and privileged. That’s dangerous for those who don’t fit that mold and have no interest in doing so.

Fear of a butch queen president is real.

My hope is that, in his mind, Pete is just straight up serving us Butch Queen Realness For The Gods, serving it up piping hot to 10s across the board all the way to the White House. Then, once he is elected, Pete drops the butch facade like the drag it is and can be himself.

Maybe he shows up to the inauguration in Jackie O sunglasses and does a double costume runway reveal and starts the speech with “Hey, bitches” and ends it with “That’s all.”

Ian Aber is a queer comic, show runner and writer living in Atlanta.