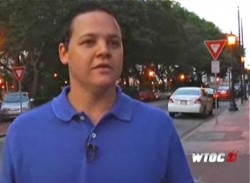 A gay man who was beaten in downtown Savannah has been released from the hospital as local and federal authorities investigate conflicting accounts of what took place early Saturday.

Kieran Daly, 26, was released Sunday from Memorial University Medical Center in Savannah after being punched in the back of the head during a confrontation with two Marines about 3:45 a.m. Saturday. He was knocked unconscious, suffered bruising on his brain and had two seizures.

Friends of Daly (top photo) say they were joking with the two men — Keil Joseph Cronauer (second photo), 22, Christopher Charles Stanzel (bottom photo), 23 – before the situation took a violent turn. The two men, who now face a misdemeanor battery charge, say they were being harassed by Daly.

As Savannah police continue their investigation, the FBI has launched a preliminary inquiry into the incident, according to Special Agent Stephen Emmett, a spokesperson for the FBI’s Atlanta office. The inquiry is in consultation with the U.S. Attorney’s Office in Savannah to see if the case may fall under the jurisdiction of a federal hate crimes statute signed into law last October. Georgia is one of five states without a hate crimes law. 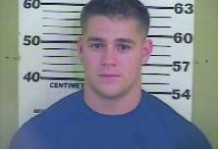 The incident is also being investigated by officials at Marine Corp Air Station Beaufort where Cronauer and Stanzel are stationed. The two men were released into military custody on Saturday and are restricted to the base about 40 miles north of Savannah.

Also, a rally is set for 2 p.m. on Sunday in Johnson Square in downtown Savannah to call attention to the incident. Georgia Equality is working with its Savannah chapter and other gay organizations there, along with friends of Daly, to organize the rally, according to Jeff Graham, GE’s executive director.

LGBT activists in Savannah and Atlanta have expressed outrage over the misdemeanor charges filed in the case. The incident remains under investigation by Savannah Chatham Metro Police, which could upgrade charges as its probe continues, according to Officer Gena Moore, a spokesperson for the department.

Officer Tracy Walden, the police department’s LGBT liaison since December 2006, was informed about the incident soon after it took place, Moore says, and has been updated as the investigation continues.

Cronauer and Stanzel were arrested within minutes of the attack when a police officer found the two men hiding in an empty lot between two buildings, out of breath from having fled the scene, according to a police report. But since, investigators haven’t been able to interview Daly or obtain his medical records to see if his injuries support upgrading the charges to aggravated battery, which is a felony, Moore says.

“We haven’t confirmed if his injuries are more severe than what we are told. Until we can do that, we don’t have any more than the misdemeanor battery charges,” Moore says. “We have to see the proof. We can’t go by what the media is saying. We are in the very early stages of the investigation.” 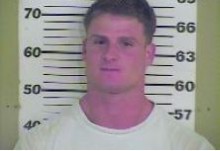 Police investigators also have additional witnesses to interview and are seeking any video footage of the incident that may have been captured by nearby security cameras, she says. Daly informed the Savannah Morning News of the attack and conducted an interview Sunday with WTOC 11 (see video above), but hasn’t yet talked with police.

“We’re hoping to interview him, but we’re not getting a lot of cooperation at this point. It could be timing,” Moore says.

Cronauer and Stanzel each faced an $1,850 bond when they were booked into the Chatham County Jail about 4:40 a.m. Saturday. They were later released to the military, which is standard protocol when military personnel are arrested on misdemeanor and several felony charges, Moore says.

Kevin Clark, a Georgia Equality board member who directs its Savannah chapter, says the lack of felony charges in this case continues a trend seen before in the coastal city.

“This is just the most recent example of violence that occurs on our streets as a result of people being just who they are,” Clark says. “It is just laughable that an attack as brutal as this could be that it could be classified as a misdemeanor. It is a felony. It is absurd that professional people could label this attack as a misdemeanor. That is the root of my deepest anger.”

Clark said Monday that activists in Savannah are working to meet with Chatham County District Attorney Larry Chisolm to question the prosecutor about the charges filed in the case. But a spokesperson for Chisolm said Tuesday that any meeting would be premature since the case hasn’t been turned over to prosecutors yet.

“It would be premature for the DA to speak to anybody regarding the facts of the case because he doesn’t have them yet,” says Alicia Johnson, public information officer for Chisolm’s office. “No one in our office has the case file. It hasn’t even made it to our office yet.”

The case is attracting widespread media attention, both across Georgia and the U.S. In an editorial published Tuesday, the Savannah Morning News called the incident an “intolerable attack.”

The incident, as spelled out in a six-paragraph narrative included in the police report, includes conflicting details on how the event unfolded early Saturday.

On 06/12/2010 at approximately 0345, while in a marked unit and in uniform, I was patrolling west bound on Broughton St. at Barnard St. when I observed two white males running through Congress Lane at full sprint. I turned my vehicle around to find out why they were running through the lane but they saw me turning around and by the time I got back around they disappeared. I was suddenly dispatched on an EMS hot call at Congress St. and Bull St. at approximately 0348. Upon arrival I noticed a white male, Mr. Kiran Daly, laying on the ground unconscious. There were two other people hovering over him, Ms. Alison Brennan and Mr. Nicolas Bolte. I ran out of my vehicle and asked what happened? Ms. Brennan hysterically yelled out, that Mr. Daly was unconscious and was knocked out by two white males wearing the same clothes of the two subjects I was trying to find a couple of minutes prior. Ofc. Lemasters arrived on scene and stayed with Mr. Daly until EMS arrived. I proceeded back to the location where I last saw the two subjects.

I found the two subjects, identified as Mr. Christopher Danzel and Mr. Keil Cronauer, in between a fenced in, dark empty lot between two buildings on Congress Lane at Barnard St. I asked the two subjects what they were doing in there and they both stated out of breath, that they were waiting for a friend to pick them up. The lot they were in was empty and there was no way inside but to climb the fence. Both subjects climbed back over on to Congress Lane and questioned as to why they were running through the lane earlier. Mr. Cronauer stated that they were being harassed by a white homosexual male earlier in the evening and just wanted to get away and meet their friend on Bay St. Mr. Stanzel stated that he was going to meet a friend on River St.

I placed both subjects in a marked unit and went back to Congress St. and Bull St. to do a show up. At the time of arrival Mr. Daly was already being transported by MedStar to Memorial Hospital. Both Mr. Stanzel and Mr. Cronauer were identified by Mr. Bolte and Ms. Brennan as the aggressor.

Mr. Bolte stated that they were walking east bound on Congress St. and ran into the two subjects around Whitaker St. He continued to state that Mr. Stanzel followed Mr. Daly who was ahead of them and he stayed back with Ms. Brennan who was trying to calm Mr. Cronauer. A few seconds after that Mr. Bolte stated that he saw his friend Mr. Daly laying on the ground unconscious with Mr. Stanzel standing over him.

Ms. Brennan stated that they were all eating pizza and were joking around with the two subjects when Mr. Cronauer got upset because he found out Mr. Daly was a homosexual. She continued to state that she was trying to get Mr. Daly to walk away because she heard Mr. Cronauer tell him “did you just wink at me!” At which point she stated Mr. Stanzel walked behind Mr. Daly and when she turned her attention to them Mr. Daly was on the ground unconscious. She immediately ran to him and in passing asked Mr. Stanzel, “did you just hit him?” Mr. Stanzel’s response was “No” and took off running with Mr. Cronauer heading west on Congress St. She then went to the aid of Mr. Daly and she stated he did not have a pulse at first. She then gave him some “chest rubs” and all Mr. Daly did was lift his eyebrows but did not wake up.

I contacted Sgt. Rowse who shortly responded on scene. A request to detectives was made and both Mr. Stanzel and Mr. Cronauer were arrested for battery. Ms. Brennan and Mr. Bolte left the scene to see Mr. Daly at Memorial. I tried to get all of Mr. Daly’s information and check on his status by calling Memorial. They could not give me any information except that Mr. Daly was there.

The Marine Corps says a preliminary investigation shows that Cronauer and Stanzel told investigators they were the subject of “unwanted verbal advances.” The full statement from the Marines, which was released Monday:

Marine Aircraft Group 31 is currently conducting an investigation into the facts and circumstances surrounding the alleged assault over the weekend in Savannah, Ga., involving two MAG-31 Marines. The two Marines in question are currently restricted to the base while the investigation is pending.

From a preliminary internal investigation the Marines in question stated they were subject to unwanted verbal advances, that they were closely followed, and that a threat was communicated by a member of the other party. Col David Robinson, Commanding Officer, MAG-31 stated “Although this certainly does not justify the actions of the Marine who punched the individual, it is important for us to consider both sides of the story.”

As with most incidents there are multiple perspectives, accounts and recollections. The facts of this isolated incident will come out through investigations by civilian and military authorities. Although the initial reports from the arresting officer and the media coverage of the incident are widely disparate, we are committed to resolving the inconsistencies between the reports.

“The United States Marine Corps does not tolerate discrimination or violence of any kind between military members and the citizens we defend,” said Col. David Robinson, commanding officer, MAG-31. “Military authorities and civilian agencies are cooperating. As the investigations shed more light onto the situation, the appropriate actions will be taken regarding the uniformed service members involvement and if it is determined that civil or criminal laws were broken, the individuals will be held fully accountable.