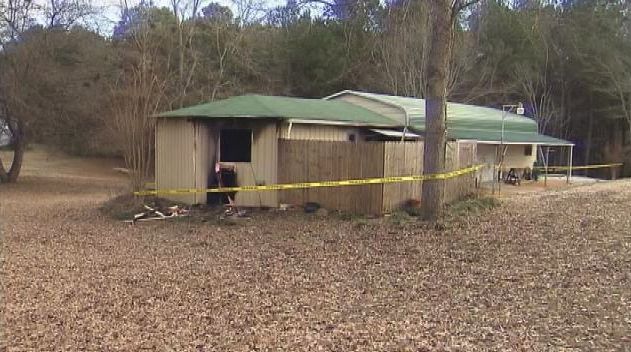 The FBI has launched a preliminary inquiry into the suspected arson at the home of a Carroll County gay man, but the case is likely to remain with the local sheriff’s office, authorities said. Vandals threatened Chris Staples (photo), 43, on Saturday by throwing a rock wrapped with anti-gay slurs through a window and then, hours later, apparently setting his home on fire. He woke up about 6 a.m. on Sunday with flames filling his bedroom in the home, a converted pool house off a quiet area of Highway 27 near Walker Lake in the county west of Atlanta. He escaped without serious injury and is now staying with friends at an undisclosed location.

The FBI assisted the Carroll County Sheriff’s Office in processing the crime scene and is working with federal prosecutors to see if the case may fall under the jurisdiction of a federal hate crimes statute signed into law in October 2009, according to Special Agent Stephen Emmett, a spokesperson for the FBI’s Atlanta office. “We are prepared to take a closer look at it, but everything we have so far indicates that the case will stay with Carroll County authorities,” Emmett said Tuesday. “It is not unusual for us to send investigators and crime scene technicians because we are looking to see if it could evolve into a federal prosecution.” The FBI launched a similar inquiry last June into the alleged beating of a gay man in Savannah, but federal prosecutors ultimately passed on the case and left it in the hands of the local District Attorney’s office. Georgia is one of five states without a hate crimes statute, so any hate crime charges related to the alleged arson in Carroll County would have to be filed by the U.S. Attorney’s Office in Atlanta. A spokesperson for the Carroll County Sheriff’s Office, Capt. Shane Taylor, told the Times-Georgian that he’s “never seen anything quite like” the alleged arson and vandalism. “Right now, we are focused on the who, and then we’ll find out the why as we move forward with this investigation,” Taylor told the newspaper. “This is an active investigation, and I can’t say much more than that. Finding out who is responsible for this is our top priority.” Carrollton Fire Department Chief Jimmy Bearden said the fire was intentionally set. “We do know that the fire was intentionally set, and we have taken evidence to the crime lab for testing,” Bearden told the Times-Georgian. “We are meeting with all the agencies involved to update the status of where we are in the investigation and what steps we take next as we work to determine who is responsible for starting this fire.” Some Carroll County ministers reacted strongly after the incident, speaking out about the violence and pledging to rebuild Staples’ home.

Keith Jiles, pastor of Word of Life Gospel Ministries in Carrollton, said he reacted with disbelief when he heard that Christopher Staples’ home on Alvin Drive was burned Sunday morning after a large rock wrapped with a threatening note containing anti-gay slurs was thrown through a window the house Saturday night. Jiles said the church will help by rebuilding Staples’ home. “You always hear about things like this happening somewhere else, but not in your own community,” he said. “I am saddened to think that someone in our community could have this much hatred toward another person. However, it is at times like this that the church has the opportunity and responsibility to rise and shine. After all, this is what Christ commands Christians to do.”

Larry Massey, the pastor of Life on the Word in Carrollton told the newspaper that he’s thankful Staples wasn’t hurt and that despite his sexual orientation, everyone is “precious in God’s sight.”

“I definitely hate anything like that to happen to anybody,” Massey said. While a person may not approve a someone’s lifestyle, he feels it is important for to make a distinction between the person and the way they life their lives because everyone is “precious in God’s sight.” “I’ll definitely have our church praying for him,” Massey said.

UPDATE: A $10,000 reward has been offered for information leading to arrests and convictions in the case, according to a spokesperson for state Insurance Commissioner Ralph Hudgens. The funds are part of the Georgia Arson Control Program, a portion of which is administered by Hudgens' office, says spokesperson Matt Kilgallen. "Any fire in the state of Georgia that is determined to be arson is part of this arson rewards program," Kilgallen said. Anyone with information about the case can call the state's arson hotline at 1-888-282-5804 and can remain anonymous, he said. Photos courtesy WSB