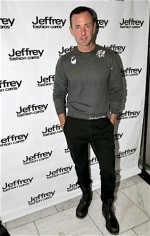 Jeffrey Fashion Cares, the annual Atlanta runway swank-fest to fight AIDS and breast cancer, is $75,000 more flush a month out from the big night thanks to a matching grant from the Elton John AIDS Foundation.

If you swoon at the mention of Gucci, Prada, Marni, Manolo Blahnik, Balenciaga, Christian Louboutin, Bottega Veneta, and Jason Wu, Fashion Cares is for you. The 18th annual event thrown by gay retailer Jeffrey Kalinsky (photo) takes place on Aug. 30 at the luxurious 12th & Midtown on Peachtree Street.

The evening includes a reception, live auction, an after party at Opera, and of course the fashion show. The after party is expected to be as big a deal for the gays as the off-the-runway fashions are for the Benefactor Bettys. B52s frontman Fred Schneider is scheduled to DJ the bon soir soiree.

Local gay activist and do-gooder Barron Segar, a longtime board member of the Elton John AIDS Foundation, announced Tuesday that the foundation is again ponying up big dollars to benefit Suan G. Komen for the Cure and the Atlanta AIDS Partnership Fund.

“We are so grateful for the support of Barron Segar and the Elton John AIDS Foundation. For the past five years, their generosity has helped us achieve goals we never thought possible,” Lila Hertz, a 2010 event co-chair, says in an announcement.

The event draws the well-heeled and generous in what social columns call “the beginning of the fashion season.” We thought that was this week’s premiere of the next “Project Runway” season, but what do we know?

What’s clear is that Jeffrey Fashion Cares rakes in the dough for its worthy causes—to the tune of $9 million since its inception. This year’s host committee adds the Elton John AIDS Foundation funds to the $150,000 already in the coffers, and that’s not including sponsorships and other donations.