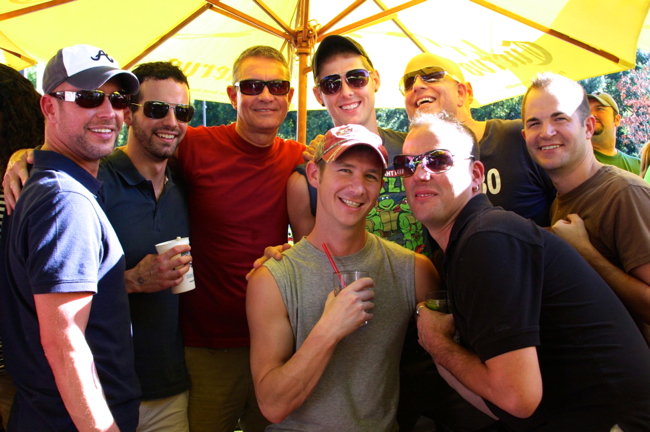 Southern Softpaw League jump-started Atlanta’s gay fall softball season a week early on Sunday–how else?–with a beer bust and T-Dance. No reason to break a bottomless beer tradition that players are as committed to as the game itself.

What does break with tradition is that there is no Hotlanta Softball Fall Ball this year. Instead, Atlanta’s boys (and girls) of summer interested in playing through fall join forces with the fall-only Southern Softpaw this year. Games begin at 10 a.m., with opening ceremonies at noon, on Saturday, Sept. 15 at Southside Softball Complex and continue each week through Oct. 6. Since 2009, Softpaw and its parties benefit animal charities near and dear to gay hearts.

Opening Day games on Sept. 15 are followed immediately by a party at Heretic from 4 p.m. – 8 p.m. You know what to expect. Like the Atlanta Talons team did for the pre-party on Saturday, the Atlanta Hammerheads host the Season Opener Celebration with a $10 beer bust, raffle prizes, $1 Jell-O shots, hot food off the grill and live music. You can also expect afterparties after the games at a different host bar each week throughout the season.