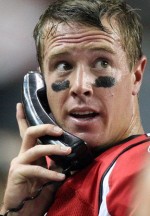 That’s right. The six-year, $72 million stud rookie for the Atlanta Falcons — thought a long-shot for the team’s Sept. 7 opener — will suit up and lead his new team.

Team officials said they expect Matt Ryan to start all 16 games and he will become the first QB in the NFL since 2002 to become a starter.

“Anything you get in this game is earned, whether it be a touchdown, a win, whatever it is you earn it in this game,” Ryan said. “In some sense it is satisfying in that light. But trust me, there’s a lot of work ahead. I know that probably just as much as everybody else around here.

“There’s going to be some ups and downs. You’ve got to try and stay mentally tough and try and grind through it.”

So much for hunky QB Joey Harrington.