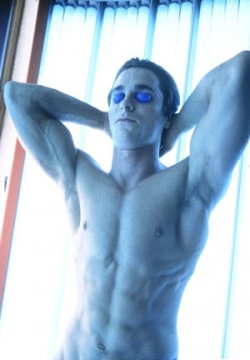 Gay boys beware: Get your tanning bed fix for the winter soon, as the health care legislation moving through Congress will leave you feeling a bit burned.

The Botax first included in the bill — a tax on elective cosmetic surgery added to help pay for the legislation — was surgically targeted by doctors. In last-minute negotiations before the bill gained initial approval early Monday in the U.S. Senate, that was dropped.

In its place? A 10 percent tax on tanning services. Yes, those tanning services — the indoor ones that lily white gay boys favor to stay a few shades darker during winter or use to provide a base before they head out on that cruise or down to Pensacola for Memorial Day.

Dermatologists cheered while some gays jeered.

“We suggested that the tanning tax would be a better alternative to the cosmetic tax and hopefully will reduce the incidence of skin cancer down the road,” said David M. Pariser, president of the American Academy of Dermatology Association, which represents dermatologists.

The American Medical Association had also opposed the proposed 5% tax on cosmetic procedures — dubbed the Botax after the antiwrinkle product Botox — which was among the issues it wanted changed by Senate Majority Leader Harry Reid. After that change and others were made over the weekend, the AMA announced its support Monday for the Senate bill.

So much for that tanned and chiseled look popularized by pre-Batman Christian Bale in “American Psycho” (photo).