‘Fagbug’ drives into Atlanta for Out on Film 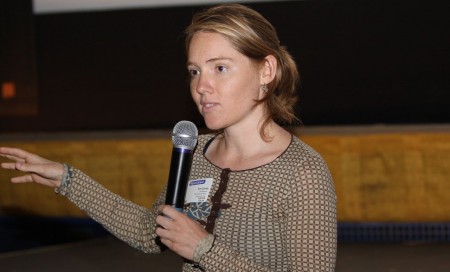 The four-day Out on Film opened Thursday with the LGBT film festival debut of “Fagbug,” the documentary from Erin Davies (photo) who traces the impact of bright red homophobic graffiti sprayed on her Volkwagen Beettle.

Davies was on hand at the Plaza Theatre to introduce the film and field questions after the screening. The 83-minute film follows Davies, her initial reaction to the vandalism and her later 58-day driving tour with the car across the country.

Out on Film continues this weekend with a trio of films on Saturday and two films and a series of shorts on Saturday. A highlight is actor and writer Charlie David’s appearance Saturday for the screening of “Mulligans.” David plays college buddy Chase in the film, which follows two young men as they discover the importance of friendship and second chances. Read more about the films and the weekend schedule.