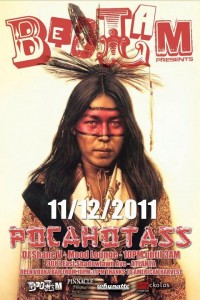 Controversy erupted on a Facebook invite by the Bedlam party crew over its PocaHotAss party scheduled for Nov. 12. Sharp barbs traded over the Native American theme led to sponsors pulling out and ultimately to organizers canceling the event. Bedlam’s monthly themed costume parties – including Whore-ified Halloween, WackedOut Blackout and Queers Cheers & Champs to name a few – almost always go off without a hitch. But when word spread about PocaHotAss (top photo), which asked guests to celebrate Thanksgiving dressed “in your best looks inspired by Native Americans, European settlers and pilgrims of that era,” some queers, including members of GlitterBomb ATL, were offended. That initiated a conversation on Facebook that blossomed to include Native American groups about why the party theme was problematic. “The party was offensive in that it’s cultural re-appropriation where white people steal from, mock and make fun of different cultures,” says Jesse Morgan, a GlitterBomb organizer. “It’s institutionalized racism and also institutionalized misogyny in particular because the story of Pocahontas includes her forcible rape and the disturbing affect of white culture in taking native people’s lands. To have a party based on that is disgusting and unacceptable.” Most of the nastiest back-and-forth went down on the Facebook invite, including accusations from Bedlam being insensitivie (“idiots”) to being outright racist (“racist garbage”) about the plight of early Native Americans. Bedlam organizer Barry Brandon initially defended the party, and a number of Bedlam faithful retorted that they intended to attend anyway and that critics were being overly sensitive. 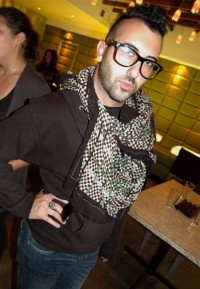 Two days of online comment mayhem ensued. The invite has since been taken down. The conversation led to an official GlitterBomb action that included contacting the host bar, Mood Lounge, as well as party sponsors with their displeasure. Longtime Bedlam sponsors including Whynatte, Pinnacle Vodka and American Harvest Vodka backed out after being contacted through Facebook, Twitter and by e-mail. “It was awesome to see the power of an intersection of queer and Native American groups,” Morgan says. “A lot in the gay community deny intersections, and we searched for and are proud of these intersections. It was great to see us come together, recognize what we wanted and facilitate change.” Brandon (second photo) canceled the party, apologized and says that racial insensitivity is the last thing he intended. “People who know us know that Bedlam parties are a play on words for the name, a look that’s inspired by that theme, and a costume party. That’s all,” he tells Project Q Atlanta. “Offending people is not what we’re about, it’s not what we represent, and it’s just not who we are.” Brandon says Bedlam still intends to have a party at Mood Lounge on Saturday night, though a new theme has not been decided. He reached out to Morgan to discuss the brouhaha, and Morgan says he is pleased with how open Brandon was to the conversation. “I am deeply and sincerely sorry that people were so hurt and offended and apologize for the perceived intent,” Brandon says. “It was never my intention.” This isn’t the first time activists have put Bedlam in hot water. The Bedlam: Derelicte party inspired by the “Homeless Chic” fashions in the movie “Zoolander” also caused an uproar. Morgan says he has asked to be on the Bedlam planning committee for future parties but has not received a response on that yet. UPDATE: Bedlam recasts event as CANucopia with costumes reflecting autumnal bounty and a food-drive. Photo by Loren Hoffmann