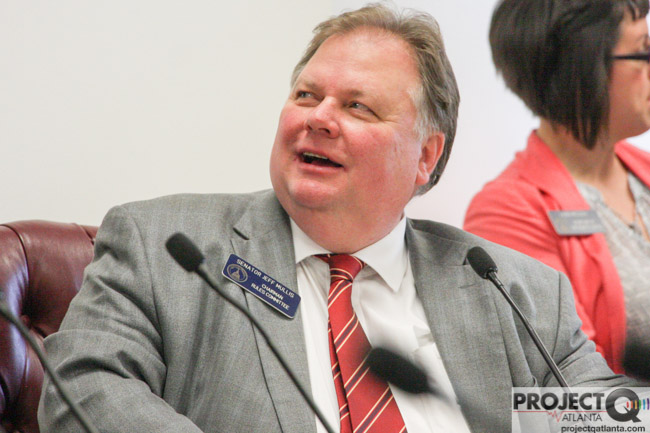 Mounting criticism over an LGBT adoption ban inserted into a bipartisan bill modernizing the state's adoption laws prompted Senate lawmakers to send the measure back to committee.

It's a setback for a controversial amendment to House Bill 159 that would allow adoption and foster care agencies that receive public funds to ban adoptions to LGBT people and others based on religious beliefs. Republicans on the Senate Judiciary Committee hijacked the legislation on Thursday and added the amendment.

The vote sent the bill to the Senate Rules Committee, which decides what bills see a vote by the full Senate. On Monday, committee Chair Jeff Mullis (photo), a Republican from Chickamauga, criticized the amendment and said it was being returned to the Judiciary Committee.

Sen Mullis said the adoption bill “went a little extreme and we are going to moderate that somewhat.” #gapol

A Senate Judiciary subcommittee was not expected to consider the bill on Tuesday.

#HB159 will not be on today's Senate Judiciary Committee agenda, full committee doesn't meet until Thursday, likely to come up then.#gapol

The full Judiciary Committee – the same panel that voted 7-4 to add the amendment – meets on Thursday.

On Monday, Gov. Nathan Deal criticized the anti-LGBT provision and urged lawmakers to scrap it.

“I would hope they would reconsider the addition to this language that could put the whole bill in jeopardy,” Deal said told the AJC.

But supporters of the anti-LGBT provision dug in. Sen. William Ligon, the Brunswick Republican who sponsored the amendment, told the Golden Isles News that the amendment would allow the state to partner with “as many child placement agencies as possible.”

“In addition, this language ensures that the state is not being adversarial with these child-placement agencies attempting to force them to go outside their policies or areas of expertise,” Ligon said. “The state must respect the overall structure of these organizations, their limitations and their missions as Georgia has had the habit of doing. We need to put this into law so that child-placement agencies have a solid legal foundation and confidence that these long-standing policies will continue to be honored now and in the future.”

Sen. Josh McKoon, a Columbus Republican with a lengthy anti-LGBT record, voted for the amendment and took to Twitter to defend it.

Now you are being obtuse. Believing that children should be raised by a married husband and wife does not equate to “hate”. https://t.co/92GceMcnff

Returning the bill to the Judiciary committee also prompted LGBT opponents of the amended bill to cancel a press conference scheduled for Tuesday. Georgia Equality was going to be joined by child welfare advocates from Families First and Chris 180 to discuss their opposition to the legislation.

Jeff Graham of Georgia Equality is “cautiously optimistic” that the “same sex adoption” amendment will die in committee. pic.twitter.com/7j3Ac8KXf0

Also Tuesday, the ACLU of Georgia said it opposed the changes to the legislation and urged lawmakers to remove the amendment.

“It’s a sad day when a bill that was supposed to be about helping foster kids gets turned into a vehicle for state-sanctioned discrimination against LGBT Georgians,” said Andrea Young, ACLU of Georgia's executive director, said in a prepared statement.

“We are encouraged by the growing number of leaders from both parties, including Gov. Nathan Deal, who are speaking out against this discriminatory provision that would make it harder for foster children to find forever homes. We urge the Senate to stand up for kids and families by removing this anti-LGBT language from HB 159.”

The ACLU of Georgia said the language added to the bill would allow adoption and foster care agencies that receive state funds to discriminate based on the agency's “moral convictions and religious beliefs.” That would allow the agencies to ban adoptions to LGBT people, interfaith couples, people who are divorced and others, according to the ACLU.