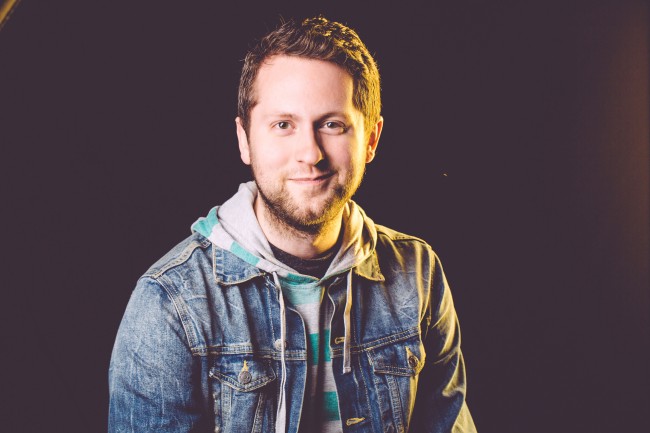 Ky Krebs came up and out in the South, and it informs who he is as a person and comedian. Making his Atlanta debut June 29 headlining Relapse Theatre, Ky brings a mix of charm, sass and intelligent joke writing in his arsenal to entertain all over the US.

Currently in Austin, Krebs is a rising queer voice in comedy and as co-host of the “Extra Salty” podcast, where he offers a weekly dose of tea, shade and laughs.

He sits down with Q mag to talk shop, including interview exerpts not seen in print.

This is your first time in Atlanta. What do you expect?

I’m super excited about it. I've heard that Star Bar is amazing, and that if I bump into Nene Leakes, I have to give her $20 as a thank you for her helping me up my reaction gif game so much.

How did you get started in comedy?

This one’s a roller coaster. Long story short, I've wanted to do it since I was a kid, but lived in Nowhere, Louisiana. I got the intention squashed out of me. Then I got in an abusive relationship in Austin, and as I was getting back into the idea of comedy, doing it seemed like it could be at least a momentary escape from the hell situation I was in.

When he told me he thought I'd bomb and be terrible, that was the straw that broke the camel's back since it's all I've ever wanted to do. I kicked him out of my house, stood my ground, and started stand-up a few weeks later. The rest is history, I guess.

What is the most rewarding part of being a comedian?

Being able to make a room of people laugh. Even if you talk about real world issues, it's still this unifying moment where the audience doesn't have to deal with anything. You get to bring a big group of people with different problems, beliefs, attitudes and perspectives together to just let go for a bit. It's electric.

What is the worst part of being a comedian?

Some people feel like they can just say anythingto you. I've been told that I should write more jokes about the things I'm insecure about “like my nose and beard,” even though I'm not and never said I was. Audience members love saying they've been told they should try it because a friend thinks their funny, which makes it feel like what we do is so easy and thoughtless that anyone can do it.

Oh, and sometimes I'll advertise a show by saying I'm a queer comedian and people looooove saying “why does it have to be queer comedian? Can't it just be comedian?” as if me owning my queer identity is somehow inconvenient or damages the show when I really only do that to let other queer people know it's a safe space since we’re often the butt of jokes in predominantly or entirely straight comedy shows.

Advice you have for other queer people wanting to be comedians?

Do it. Queer people and other people from marginalized groups are often the best comedians, in my opinion. Be prepared to have thick skin, though. Clubs have asked me if all my jokes are “gay jokes.” Other comics have told me owning my queer identity would be bad for my career. Audience members have audibly scoffed when I’ve said I’m queer on stage.

But you know what else? I’ve worked plenty of other clubs. I’ve made my identity a large talking point in my set and killed, even in a room full of straight people. And that audience member that scoffed came up to me after the show to tell me he thought he wouldn’t like me, but that he laughed really hard. There can be deeply demoralizing moments in stand-up comedy because it’s so public-facing, but comedy needs queer voices and queer perspective. There is space for your voice.

Anything that implies you have to follow a certain path in comedy or you’re doing it wrong. My path has been completely atypical of how other people would describe the “usual” path of stand-up comedy and people got mad at me for it. I felt like I was doing things wrong for a while, but if you’re getting time and getting booked and making things happen for yourself, you’re just following your own path. Everyone’s roadmap in this industry looks incredibly different.

Describe your comedy in three words.

You recently recorded your second album. What is the process like, and what can you tell us about it?

I don't know if I really have a process since I've only done two. Three’s a pattern, right? I just get an idea in my head, and then I have to get it done or else it just haunts me. I basically just always assume I'm not going to ever make it big, so I keep making albums because I want to be able to look back on the phases I went through in my career and have a little comedy diary as I get older. As for release date, the special doesn't have a set release date quite yet, but I will always share updates on my social media as more solid dates are set.

Favorite way to spend a day off?

When I actually get a day off, I don’t want to do anything. I like to sit at the house, order food and play video games or read. I just kind of turn into a temporary hermit that will not leave the house at any cost. I’ll also go for a walk or hike sometimes and play Pokemon Go, because there’s almost always a video game element to my days off.

What is your Pop culture obsession?

I don’t really get “obsessed” with things, but the first thing that came to mind was probably Twitter. There’s so much hilarious content on Twitter and so many fun conversation (and not so fun ones), but I love seeing the ways people use that platform to be entertaining or clever or signal boost important issues. It’s also a toxic poison zone a lot of the time, though, too.

Which comedians you adore and think everyone should know about?

How much page space can I use for this list? There are so many incredible up and coming comedians. Everyone, without a doubt, should know Carina Magyar. She's so smart, extremely clever, and one of the best roasters I've ever met. Everyone should know my podcast co-host Jasmine Ellis. They should also know the Gender Fluids cast of Ava Smartt and Arielle Norman. Maggie Maye is absolutely incredible, too. Austin comedy is so, so strong. I can go on for hours.

What can listeners expect on an episode of your podcast, “Extra Salty”?

Extra Salty is a comedic deep dive into resentment and the reasons we hold onto it or manage to let it go. I host it with Jasmine Ellis (a comedian everyone should know), and we have a variety of different guests on to interview and share a story about a resentful period in their life.

The stories range from weird work situations, to managing polyamorous relationships, to struggling with mental health. It's basically half comedy, half self-help, and it always ends with a piece of advice. Oh, and every now and then, there's an episode of just me and Jasmine spilling tea that no one asked to be spilled.

Who are your comedic influences?

I don’t know if I can say that too many people have really influenced my style so much as inspired me to try it myself? I grew up watching the classics like Richard Pryor and Eddie Murphy, but also seeing some of the less queer-friendly attitudes in some bits made me want to do my own thing. Then I got more familiar with comics like Maria Bamford who brought awareness to mental health and Mike Birbiglia’s storytelling style, along with Kathleen Madigan’s smart ass approach to jokes and a lot of it culminated into my own little thing.

I’d really like to see myself on television or a streaming service somewhere. Or touring regularly around the country. I’d just like to have the opportunity or platform to make an even larger audience of people laugh.

What is your least favorite trend in gay culture?

It’s definitely got to be putting racial/body type preferences directly in your profile description. We get it, you’re masc4masc, no fats, no femmes, no blacks, no asians, whatever. If you put that in your profile, that’s super weird.

If you don’t want to message someone back, just don’t answer them if they message you. Putting that kind of stuff in your profile is literally just you saying “Don’t even message me because of your body/skin color” which is racist, terrible behavior. The only benefit is that it lets us know who we should avoid at all costs.

If you did drag, what would your drag name be?

Ask yourself a question here

What’s the weirdest date that you’ve ever been on?

I met up with a guy one time and went back to his place, and when I got there, he showed me that he had two ring-tailed lemurs living in the second bedroom of his apartment, which in Texas is surprisingly legal despite there only being ~2,000 of them left in the wild. Yes, that’s a real thing that happened to me.