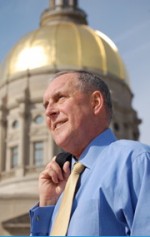 Under the Gold Dome in downtown Atlanta, anything is potential fodder for misguided lawmakers.

This time it’s oral sex and male prostitution. A few conservative lawmakers are upset that in a time of a state budget crisis, researchers at public schools are doing exactly what they are paid to do — research.

Criticism is building against Georgia’s University System for employing faculty members who are academic experts in such areas as oral sex and male prostitution.

Friday, several days after Rep. Calvin Hill (R-Canton) (photo) said he was “personally outraged” over the issue, a second member of the state House echoed his criticism, drawing applause from some colleagues.

Also Friday, Jim Beck, president of the Georgia Christian Coalition, said he wants legislative committee hearings to sift through the facts. “We are concerned,” he said, “if the initial reports are true.”

Hill singled out Georgia State University, which lists in its 2009 media experts guide faculty members who are knowledgeable about male prostitution and oral sex. The guide is used by reporters and public policy organizations to find experts in various fields. Hill said he was “personally outraged” that tax money supports such professors.

His concern was echoed on the floor of the House on Friday by Rep. Charlice Byrd (R-Woodstock).

“Yes, ladies and gentlemen, you have heard me right,” she said. “In this present economy, the taxpayers’ dollars are being used by the Board of Regents to inform students about such social topics. … I believe the timing is perfect to eliminate positions of professors and staff who are paid to provide such services.”

But wait. The school says the lawmakers are “misinformed” about the purpose and value of the research.

Kirk Elifson, who is listed as an expert on male prostitution, for example, began his study during the 1980s to examine the spread of AIDS, Reitzes said. Elifson was the lead author of a 1989 New England Journal of Medicine article on HIV among male prostitutes.

Mindy Stombler, a senior lecturer at Georgia State for whom oral sex is listed as an area of academic expertise, said she is conducting a limited study on the societal messages that teenagers receive about oral sex. She looks at anything from news reports about the Monica Lewinsky scandal to the lyrics of popular rap music.

She said she expects the findings to be used in public health campaigns to help prevent the spread of diseases through oral sex.

Conservative lawmakers, never missing a chance to launch a Culture War, apparently are finding it easier to criticize pieces of research they find objectionable instead of actually closing the state’s $2 billion budget gap.

But then again, it’s the same pool of lawmakers that want to tax patrons of strip clubs an additional $5.