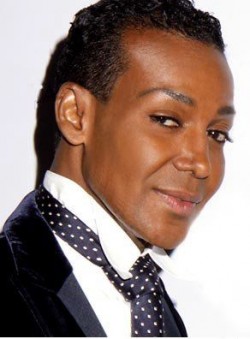 Dwight Eubanks, the sassy stylist who was the gay bestie of the gals on “The Real Housewives of Atlanta” in past seasons, may know a thing or two about hair. But when it comes to driving, he’s got a thing or two to learn. A malfunctioning headlight on his Chevy Tahoe led Atlanta police to stop him on Dec. 14 in Poncey-Highland, not long after he appeared at the CNN Dialogues forum at Grady High School in Midtown. That’s not so bad. When questioned by police Eubanks told a bit of fib, though, the kind you can get away with on Bravo’s RHOA when dishing with NeNe, Kim, Sheree and the ladies. Not so much when dealing with Atlanta police. Eubanks told officers during the traffic stop at Freedom Parkway and Boulevard that he didn’t have his license tucked into his deliciously holiday themed outfit that included a red blazer. But that’s a lie that put Eubanks on Santa’s naughty list – cops checked and Eubanks was driving on a suspended license, according to the Atlanta Journal-Constitution. Fox 5 says the suspension stems from a past incident in which Eubanks failed to appear in court. He’ll get another chance in February. Eubanks should have caught a ride with CNN panelist and fellow flamboyant queen Johnny Weir and his attorney boyfriend Victor Voronov. Eubanks, the owner of Purple Door Salon Edgewood Avenue, spent the night in jail after last week’s arrest. No word on whether he offered styling tips to his fellow inmates. Eubanks was scrubbed from RHOA, now in its fourth season, after injecting some over-the-top gay that added interesting flavor to storylines. On Wednesday, before he was arrested, Eubanks told Atlanta Boy that he doesn’t miss the show.

“I did not watch it last year but I do hear a lot of comments about it. It was fun and footsteps in the direction I was going in. I’m still great friends with them and love them all, but I feel that when you know better, you do better.” “Being on television was great, it had its advantages and disadvantages, but it’s not over yet. There’s a whole lot behind this door that America has not seen. It seems as though reality TV isn’t going anywhere, but let’s have some substance.”

Since the show boosted his public profile, Eubanks has appeared at LGBT events, including CNN Dialogues, a YouthPride fundraiser and the Carnevale fundraiser for Jerusalem House.