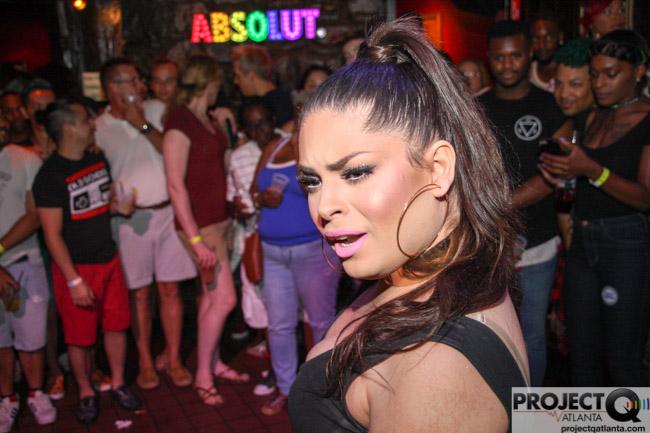 Former entertainers at Burkhart's have formed Queens United to combat inequality in gay Atlanta nightlife and scheduled a series of benefit shows to raise funds to support themselves since quitting the bar in protest over racist social media posts.

The group also launched a Go Fund Me campaign to raise $15,000 to support the entertainers.

“We cannot fund ignorance and racism in our nightlife scene,” Alissah Brooks (photo), a founding member of Queens United, said in a prepared statement announcing the new group and upcoming shows.

“There are a number of inequalities that need to be dealt with over time. Queens United is the first time that a large coalition of entertainers has been formed in Atlanta to collaborate on these issues. We look forward to announcing more in the coming weeks,” Brooks added.

Brooks and scores of other performers quit Burkhart's on Jan. 25 in the wake of a scandal over racist social media posts from the bar's co-owner, Palmer Marsh. On Jan. 27, several of the drag queens took part in a public forum to address the controversy and said the racism runs deeper than just the owner of Burkhart's. Queens United started taking shape during the meeting, which was organized by James Brian Yancey, a co-founder of Rainbros and ATL Activate.

“Many in Atlanta’s LGBTQ community care deeply about addressing racism,” Yancey said in the prepared statement. “There are a number of initiatives that parts of the community are stepping up to lead as a broader effort that is taking shape over time. But this immediate benefit and fundraiser are symbolic that we are thankful and supportive of these brave entertainers for taking the first step in addressing the unacceptability of racism over the long term.”

The benefits include Queens United Benefit Show on Feb. 16 at Park Tavern (tickets) and Queens United at Out Front Theatre on March 18. Proceeds from the shows will support the entertainers who quit Burkhart's last month.

If you are as proud of these brave entertainers and bartenders as we are, if you are dedicated to acknowledging racism in our LGBT community as we are and if you choose to give financially even if you yourself aren't well off because you understand the importance and symbolism, THEN JOIN US AND SPREAD WORD THAT ATLANTA AND THE WORLD HAS THEIR BACKS.

Since the entertainers quit in late January, the bar closed for a few days and has faced a steep drop in business without its heavy schedule of drag shows. Burkhart's shut down its Facebook page and the bar's owners have said little publicly to address the controversy. The venue's general manager, Don Hunnewell, was fired on Feb. 3 and swatted back against allegations of complicity in the scandal in a Georgia Voice column.

Marsh has apparently rebuffed several attempts by interested parties to buy the bar.

Several of the entertainers have moved to other venues, including Tossed Salad being welcomed at My Sister's Room, the Armorettes moving to Oscar's and Phoenix – the former entertainment director – being hired by Ten to debut new shows at that venue on Feb. 14.