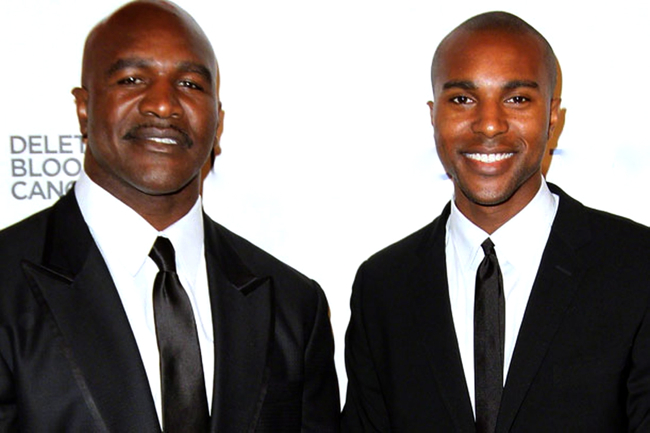 In an effort to defend his father’s bigotry heard ‘round the world, Ewin Holyfield says his famous father Evander is not anti-gay. Then goes on an anti-gay rant of his own to prove it.

Apparently, the whole Holyfield family is tone deaf. Hearing but not listening to the global response after the “gays can be fixed” diatribe that his ill-informed father let fly, Ewin went to TMZ.

The dutiful son (top photo with Dad) wants everyone to know that his mama – one of six with offspring by Holyfield – even has a gay brother that Evander tolerates. Ewin, one of 11 Holyfield progeny, also says that Atlanta’s own legendary former boxer loves everybody. “Even if they are homosexual.”

Oh that’s great, Ewin! Thanks for the explanation. No worries, and no need to continue. Oh sure, by all means, keep talking.

“My dad is the most loving and caring person you will ever meet. He treats everyone like a human being … even if they are homosexual.”

In fact, Ewin says he has a gay uncle … and Evander treats him like a brother.

Ewin adds, “My dad feels that being gay is a choice … and naturally that's how things work.  You cannot procreate and make a baby with two women, or two men.  But at the same time, my dad is not going to judge someone for their sexual orientation.”

Who needs enemies when you have a son who can dig a hole deep enough to bury you both? Thanks, son! But wait, there's more.