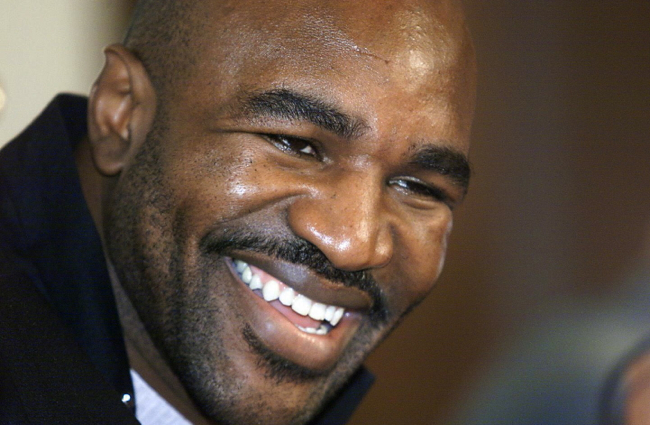 Atlanta’s own boxing, bigoted, baby-making machine owes you an apology. But taking a page out of the slur-then-sorry playbook, Evander Holyfield clearly feels worse about the bad publicity than for the anti-gay error of his ways.

Holyfield started it all on the British version of “Big Brother.” He told another housemate– and tried to justify at length – that gays “can be fixed” and are “not normal.” The boxer with one mansion-sized metro Atlanta real estate mess, six baby mamas and 11 kids also showed that the whole family, or at least one defensive son, may be as tone deaf on gay issues as he is.

Well, the response to the rant heard ‘round the world finally reached the man himself. And it makes him sad.

I am deeply saddened by any offense I may have caused anyone based upon what I said. I am sorry to any person I may have hurt or offended

Holyfield went further on TV immediately after being eliminated from the show. In his exit interview, he said that he forgot the cameras were on when he went off about gays. Okaaaaay.

“She asked me something and I thought I was sharing with her my view personally, and I forgot about everything.

“So I am going to make a public apology about that because I am sorry for anybody I offended in that situation.”

The boxing legend also wrote Tuesday that he was a man of compassion and believed God loves everybody. He added he was glad to be home and “back to the Real Deal life.” You know, where he can forget that you and your gay “handicap” exist.

“I thought the Big Brother show was about inspiring people; it wasn't that type of show.”

So let’s see. Evander Holyfield is sorry if you took offense, but there’s no apology for what you are actually offended about. And when he wasn’t thinking that he was alone in a room full of cameras, he was thinking his anti-gay views might be inspiring. Or something. Maybe he’s punchy from those years in the ring. Oh well.

Speaking of punch drunk, Holyfield is quite similarly not sorry for punching that horse either. That little gem of a PETA nightmare is really what got him kicked off the show, not the anti-gay stuff.