Evander Holyfield on gays: ‘They can be fixed’ 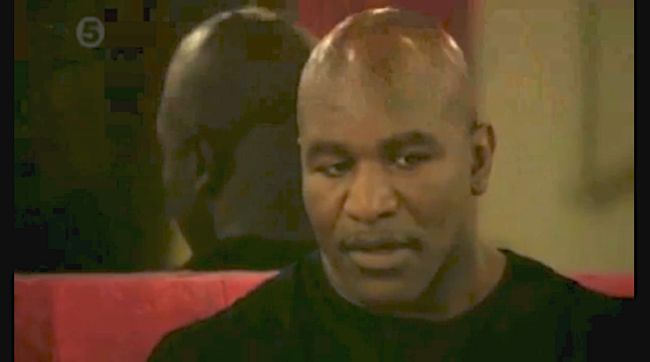 Atlanta boxing legend opened up about his views on gays on Sunday and it wasn't pretty. He compared gay people to the handicapped, argued that sexual orientation is a choice and that the gays can be fixed.

Holyfield's homophobic mutterings, which you can watch below, came during an episode of the U.K.'s “Celebrity Big Brother” as he was handcuffed in a bed with Luisa Zissman, hopefully not adding to the tally of Holyfield's children now spread across three states.

What would be good about it? That ain’t normal. It is a choice, come on, that ain’t the way nobody is made.

If you were born and your leg were turned this way, what do you do, you go to the doctor and get it fixed back, right?

All I’m trying to say, you know handicap people are born, you can’t say because they are born that way you can’t fix them.

And let's not look past his scholarly approach to what the Bible really says: “The Bible lets you know that is wrong and that is right.”

The Bible talks about debt, too, but Holyfield didn't spend any time discussing that and the 2012 foreclosure of his 109-room metro Atlanta estate. The Bible may have something to say about Holyfield's 11 children with six different women, too. But that might interrupt his proselytizing.

The show quickly slapped down Holyfield.

Big Brother does not tolerate the use of offensive language and must therefore warn you to consider very carefully the effect expressing such views may have and the harm and offense you may cause by repeating the views inside the house.

Shame, I had such admiration for Mr Evander Holyfield, he seemed dignified and I was sure he was a cool, smart, giant!

'WELL I just watched an episode of 'Celebrity Big Brother' for some unknown reason and I witnessed boxer Evander Holyfield basically tell the world that he thinks being Gay is a choice.. the woman he was having the conversation with initiated it by asking if there are any gay boxers and if they were public about it – he basically likened to being gay to having a broken arm and getting it fixed… i'm quite frankly disgusted by his opinion and anyone in the sporting world should not feel afraid about voicing their sexuality – look at the steps people like Tom Daley and Gareth Thomas have taken .. they pave the way for homosexuality to become acceptable in the sporting world and people like this Evander will never be a hero'