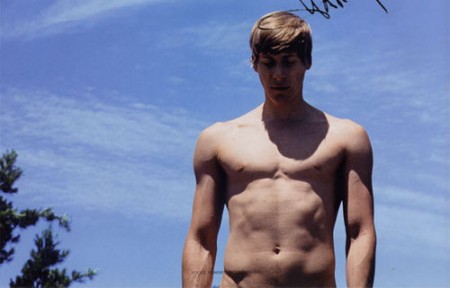 The gay rights movement has always been pockmarked with ‘traitors’ from within (Roy Cohn, anyone?), but the treachery always came from the right, not the left.

That all changed recently when Perez Hilton posted x-rated pics of Dustin Lance Black, a beloved, rising star in the movement. Black won the Oscar for Best Original Screenplay for “Milk,” Gus Van Zandt’s ferociously moving bio-pic. He burst into the limelight with a poignant acceptance speech aimed at lonely, isolated gay kids.

Before we get to the betrayal by the bleached Brutus, three things you should know about Black:

Did I mention he’s hot? Cuz he’s really hot. See my best-of pic collection. (Sorry, all G-rated. I’m not going to aid and abet Hilton’s betrayal). Heat factor aside, Perez Hilton is a traitor. Of the worst kind.

Dustin Lance Black is not the latest Larry Craig. He is not the newest version of Ted Haggard. He’s not a TV or movie star. He’s not a best-selling author or a polarizing figure with a media platform. He’s a guy committed to helping gay kids overcome the stigma, bullying and isolation they feel in schools, churches and often, in their own families. Last week, Black was honored by Lifeworks, an organization that links mentors with gay youths, providing them with a safe space and positive and affirming role models.

Yet, Hilton threw him under the bus.

Just to give you a sense of who Perez Hilton betrayed, here’s the transcript of Dustin Lance Black’s Oscar acceptance speech:

“I wanna thank my mom, who has always loved me for who I am even when there was pressure not to. But most of all, if Harvey had not been taken from us 30 years ago, I think he’d want me to say to all of the gay and lesbian kids out there tonight who have been told that they are less than by their churches, by the government or by their families, that you are beautiful, wonderful creatures of value and that no matter what anyone tells you, God does love you and that very soon, I promise you, you will have equal rights federally, across this great nation of ours. Thank you. Thank you. And thank you, God, for giving us Harvey Milk.”

Perez Hilton betrayed Dustin Lance Black and everything he stood for. Namely, us. Every man, woman and child forced to prove their humanity should be sickened by what he did.

Dustin Lance Black is not a victim of friendly fire; he is the victim of a premeditated character assassination. When Black saw the blood on the floor he must’ve looked up expecting to see the Huns on the right holding the knife. Instead, he saw one of his own. As he staggered back against the wall, you can just hear Black saying, “Et tu, Perez?”