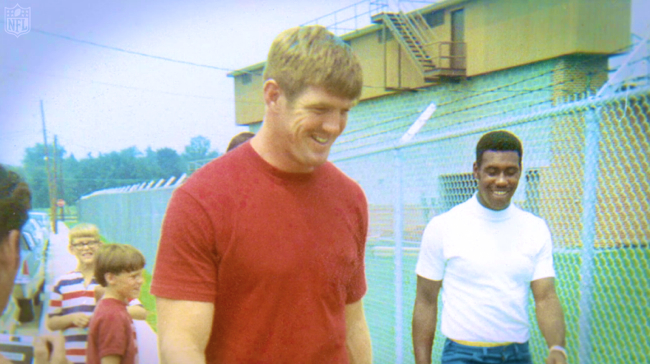 Gay football fans know that a pro jock came out after retiring from the NFL in the ‘70s. Until now, fewer were aware of his sexual encounter with a closeted star player. All is revealed in a riveting new documentary airing in rotation on ESPN and streaming online.

What sets the well-tread story of out gay NFL alum Dave Kopay apart from his Washington Redskins teammate, Pro Bowl golden boy and all-around hunk Jerry Smith (photo, in the late ‘60s) is gridiron star power. Kopay just never reached the on-field heights that Smith did, and Smith never came out publicly before his death from AIDS in 1986. What brings them together is a night in the same bed.

The NFL Network produced “A Football Life, Jerry Smith: A Double Life.” It includes a blind item one-night-stand from Kopay’s autobiography but identifies the trick as Smith. The film’s focus – the harsh reality that was being gay in the ‘60s and ‘70s – tells Smith’s story as a history lesson that many gay people might take for granted some 40 years later.

“Life” exposes both the "don't ask, don't tell" acceptance that the Redskins tight end received in locker rooms and especially from coach Vince Lombardi, who had a gay brother. But it also reveals pressure on Smith as he kept his orientation a secret for his own survival.

Interviews with Smith’s brother and sister, gay confidants like close friend author David Mixner, as well as former teammates and coaches, are sure to keep sports fans and layman alike glued to the screen. An interview with Kopay reflects almost romantically and with sadness on the dalliance between pro teammates.

“One night we went drinking, and one thing led to another, and all of the suden there was Jerry in bed with me and loving me, and maybe I was still buzzed or whatever but I thought this was really good,” Kopay says. “At least I was sharing something of myself with someone who’s close and understood all that I had been through and understood so much of what we hoped for would come. And that’s where we left it. And it never happened again.”

After retiring, Kopay wrote an autobiography, published in 1977, when he became one of the first professional athletes to come out. In the book, he recounts having sex with another athlete, for whom he uses an alias. Smith never spoke to Kopay again after that.

As every gay fan already knows, it’s easy to imagine NFL teammates making a similar connection in modern locker rooms. Like, say, on the Atlanta Falcons. Unfortunately, the local team just isn’t as gay as we would like. Of course, if any two Falcons are making the Beast With Two Backs, don't tell Falcons cornerback Asante Samuel or disrespectful wide receiver Roddy White. Luckily, gay players could probably confide in the likes of a half-naked Ray Edwards.

Nine years after his last game and just few months before his death, Smith gave an interview in which he spoke candidly about having AIDS. “Maybe it will help people understand.” But even then, Smith would not come out as gay. The Redskins logo, along with his uniform number 87, is part of the AIDS Memorial Quilt.

The documentary plays through January on ESPN, or watch now in three parts.