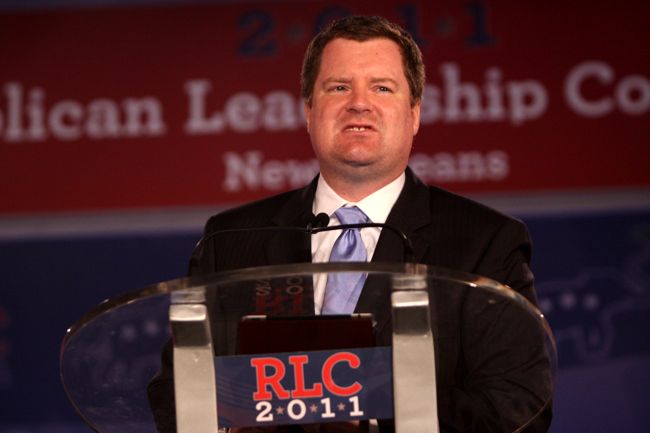 Shrill gay-slurring Atlanta radio host Erick Erickson inflamed the Twittersphere on Thursday when he tried to sound supportive of the Boy Scouts allowing gay troops. But he was really just being a dick masking himself in a distorted Biblical view.

That's Erick being Erick, which is what gets him a prime slot on WSB Radio and a gig as a Fox News contributor.

Here's how it started, less than an hour after the Boy Scouts announced that it approved allowing gay troops, but not Scoutmasters, in a 61 percent to 38 percent vote.

I honestly have no problem with the Scouts deciding that way, but I honestly cannot see me now enrolling my son in the scouts as a result.

As criticism continued, Erickson pitched himself as a Christian warrior on the side of righteousness.

@anthonymkreis I'm not here to be liked. It's be far easier to stay silent or go along to get along. But it would be wrong too.

But it gets better. Erickson turns to the tried and true “love the sinner, hate the sin.”

Sorry folks, it is not judging to note the practice of homosexuality is a sin.It would be judging though to not love them as a neighbor.

Then it's back to the gay children. Repent homo children! And if you don't back his view of Christianity, then you're not a Christian.

People not of faith do not seem to understand how a Christian can fully love a child who is gay, but also recognize we all must repent.

I love the ppl who say Jesus never said anything about homosexuality.He did say to listen to his apostles.So why ignore that?

Screw you haters, there's a movie to be seen.

Now that I've stirred up my twitter timeline, I'm off to a movie.You guys have fun.

And finally, at 2 in the morning, Erickson's not a hater. Really.

And in case 140-character blasts of Erickson aren't enough, he offers a lengthier explanation of his take on the Boy Scouts decision on his Red State blog.

Erick Erickson's world. A great place to live. If you're not gay. Or a woman. Or Jewish.