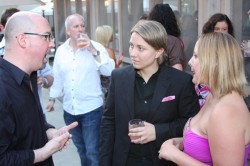 The gays who wed — yes, they’re out there despite Georgia’s double-whammy against gay marriage — joined with the founder of Equally Wed last week for the online publication’s launch party.

With a setting atop the roof of the lounge at the Hotel Palomar, a wedding cake and cupcakes, couples and cocktails, the June 24 party took on the feel of an informal wedding reception. That’s exactly the intent of Equally Wed creators Kirsten and Maria Palladino (top photo), whose goal was to publish a gay-specific wedding mag. 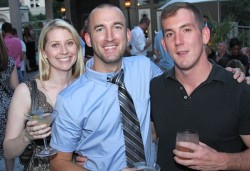 “After Maria proposed to me in Central Park on Leap Year in 2008, I immediately went out and bought every wedding magazine that Barnes & Noble stocked,” Kristen Palladino told Project Q Atlanta.

“And I didn’t see us on any single page. It bothered me so much that here it was in the early years of the 21st century, and we don’t have a national wedding magazine recognizing that couples aren’t always formed by one man and one woman?” 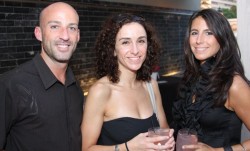 The summer issue includes a piece on Miami, tips on spicing up engagement photos, a road trip by an Atlanta couple to Cape Cod and advice on navigating the laws in states that actually allow same-sex marriages.