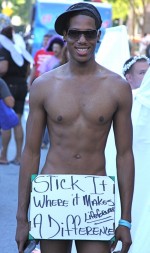 The crew at Lifeforward got inspired by Beyoncé and took their effort to recruit for an HIV vaccine study to Ansley Mall recently for a flash mob.

Yep, this isn’t your typical stodgy signup for the study, which is an effort of Emory’s Hope Clinic as it works to develop an HIV vaccine. The project is still seeking volunteers, something it started in 2009, and is employing creative new ways to get the word out.

Sure, there’s information booths at LGBT events and taking part in the Atlanta Pride parade (photo). But a flash mob at the end of the rainbow in Ansley? Now that’s showing how they want to “Run the World.”