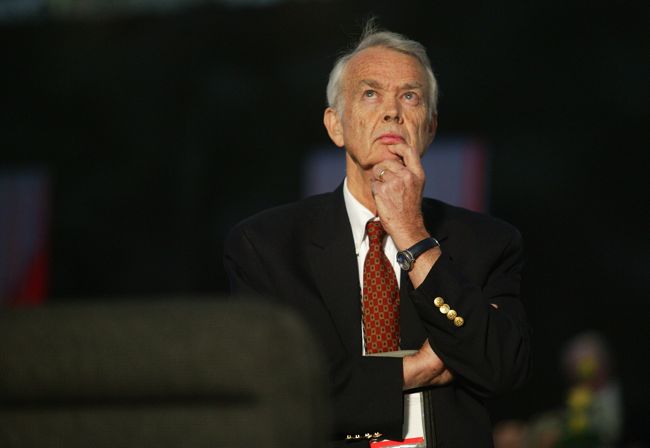 Chick-fil-A-less Emory, the place gay Atlanta goes to be gayer, faces something of an oddity for the Decatur campus. It's got a big gay problem and students are seeing red over an anti-gay pastor getting honored.

Emory's Candler School of Theology announced in late August that it was honoring Rev. Eddie Fox with its Distinguished Alumni Aware for Service to the Church. But as critics quickly pointed, that service includes a decades-long effort to keep in place the United Methodist Church's position that homosexuality is "incompatible with Christian teaching."

The school's LGBT alumni group asked that the honor be rescinded, students aired their grievances in a meeting with school officials and gay theology students are planning a silent protest on Thursday.

The GALA Steering Committee approved a motion opposing the Candler Alumni Award being given to anti-gay H Eddie Fox. It should be rescinded. — Emory GALA (@EmoryGALA) September 11, 2013

For all the controversy over the award, Fox can't be bothered to pick it up in person on Friday. He'll be traveling. But Fox did make time to eschew being labeled "anti-gay" in an interview with Emory Wheel.

Fox admitted in an interview with the Wheel that the “anti-gay” accusations do not come as a complete surprise, adding, “it makes me sad that people try to separate that singular moment in time from the work of a lifetime.”

However, Fox said he does not understand the controversy surrounding his selection.

Gay Emory students and alumni were happy to explain.

“It’s hard for me to want to lift up someone who engages in exclusionary rhetoric,” Noblitt said. “Eddie Fox does not seem to represent the values of Emory University.”
According to Noblitt, Fox has spent the past 30 years serving as a barrier to LGBT inclusion within the church.

“He is very firm in his convictions and has shut down attempts to have dialogue over the years with the LGBT community,” Noblitt said. “There is one moment in particular that illustrates his intolerance and unwillingness to talk.”

Despite the controversy, Emory is standing by its decision to honor Fox.

After careful consideration, I have decided to confer the award on the Rev. Fox. He inspires many in the Wesleyan family around the world with his deep dedication to proclaiming the gospel of Jesus Christ. He has repeatedly demonstrated his capacity to be a moving and truly evangelical preacher. His work to bring various denominations within the Wesleyan tradition together across national and cultural boundaries has few equals in recent generations. His love of Candler runs deep. These characteristics were among the reasons he was recommended for this award and why I believe he should receive it.

UPDATE | On Tuesday, Emory's gay alumni group GALA released a letter to school officials demanding that the honor to Fox be retracted. They also asked that the school publicly reaffirm its commitment to equality. The full letter:

We are writing with concern about the recent decision by the Candler School of Theology Alumni Board to give one of the 2013 Distinguished Alumni Awards to one Rev. Dr. H. Eddie Fox of the World Methodist Evangelism Institute. This decision is disturbing and deeply disappointing on a number of levels, including but not limited to the following:

1. Fox has been the leader in the United Methodist Church in the fight to keep Lesbian, Gay,   Bisexual, Transgender and Queer people from gaining any equality in matters of ordination, marriage, and even membership in the church for over 30 years.

2. Fox continues to engage in obstructionist parliamentary procedure at General Conference and elsewhere to cut off any type of holy conferencing that disagrees with his personal understanding of scripture as it pertains to human sexuality and other matters.

3. Because of Fox’s advocacy, there are United Methodists who have left the denomination and who do not feel comfortable fully being themselves in their own churches.

4. This type of narrow and bigoted theology has led many Lesbian, Gay, Bisexual and Transgender persons to believe that they are unworthy of God’s love and in many cases caused harm to themselves and others because of this distorted belief.

5. Bigoted homophobic rhetoric, such as the rhetoric preached and advocated by Fox has led others to perceive that violence against Lesbian, Gay, Bisexual and Transgender people is legitimate.

For these reasons and others we request that in your capacity as Dean of the Candler School of Theology, you would:

1. Retract the Distinguished Alumni Award to be presented to Rev. Dr. H. Eddie Fox before the luncheon scheduled on September 27, 2013.

2. Make a public statement reiterating Emory University and Candler School of Theology’s commitment to access, inclusion, and equity before the award luncheon scheduled for September 27, 2013, as presenting an award to someone with the characteristics and records outlined above undermines the very values that Emory and Candler explicitly seek to implement.

3. Evaluate the membership of the Candler Alumni Board and take immediate steps to intentionally diversify its ranks along lines of race, gender, ability, age, sexual orientation and gender identity.

4. Take immediate steps to rewrite the criteria for the Distinguished Alumni Award and other current and future awards given by Candler or any of its affiliates to prevent such bigotry from receiving affirmation, public recognition and encouragement in the future.

We fully support freedom of speech for students, faculty, staff, alumni and the larger community, but the distinction between the hate rhetoric of Dr. Fox and the values of justice and equality that Emory University and Candler School of Theology claim to make must be made clear.  We ask for these measures to be taken to ensure that Candler remains a safe place for persons regardless of their sexual orientation and gender identity and that Candler’s good name and reputation not be damaged by actual or perceived affiliation with homophobic bigotry as consistently displayed by Rev. Dr. H. Eddie Fox.

On behalf of GALA,