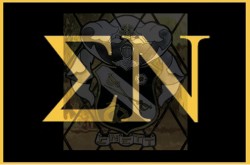 A gay student at Emory University says he was assaulted and called “faggot” during a weekend party at an off-campus Sigma Nu fraternity house.

About a half-hour after the unidentified student – dressed in a lime-green jacket, red pants and a wizard hat –arrived with friends at Sigma Nu’s off-campus house, a recent Emory graduate took the student’s hat and began questioning his sexual orientation, according to the Emory Wheel.

“This guy approached me and asked why I was wearing my hat. … I said that I like the hat, just as you like your pink shirt. He then asked me if I was gay, and I said I was. He then started choking me with his elbow and put me into a head lock, and he dragged me out of the party by my neck.”

After the student was allegedly dragged the approximately 10 to 15 feet from the house’s common area to the door and thrown onto the front lawn, Smith was overheard telling other attendees “Hey, this kid’s a faggot.”

The student says others at the party cheered when he was dragged from the party and added their own anti-gay slurs.

The alleged assailant tells the newspaper that he did take the student’s hat and asked him, “Why are you wearing this gay ass hat?” and then became agitated when the student questioned the assailant’s pink shirt. In a comment posted to the online story, the alleged assailant, identified as Adam Smith, says he was drunk.

So chalk this up as me being a drunk asshole, a frat guy with too much testosterone, or whatever you want to call me I really don’t care. I just want everyone to know that that’s literally all it was, that’s the honest truth. I’m not some ignorant bigot looking to bash homosexuals, so please don’t think that.

Officials with Sigma Nu described the student as uninvited and classified the incident as “personal, not fraternity, conduct.” A police report has not been filed, but school officials are investigating the incident, according to the newspaper.

The incident comes as the Decatur campus consistently ranks among the nation’s friendliest for gay students.