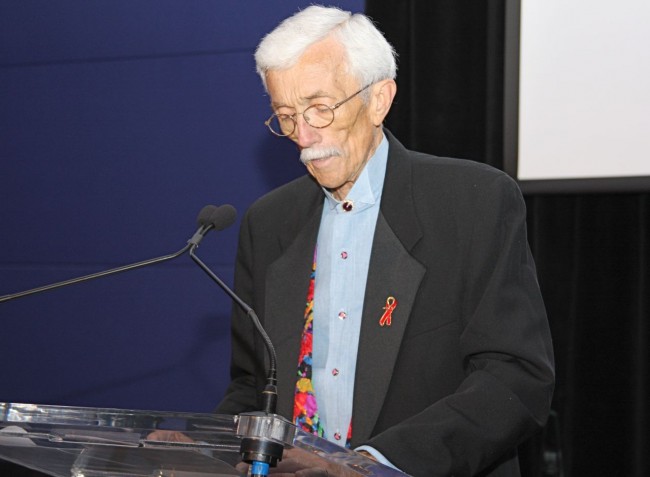 As one of gay Atlanta’s favorite sons, AIDS activist and gay philanthropist Jesse Peel was already going down in the annals of LGBT Atlanta history. Now he donates the written record to Atlanta’s gayest university for posterity.

The early years of AIDS? Peel was there. The local reaction to the devastation? Peel was on the front lines. And he saved everything. Now a vast archive of journals, appointment books, subject files, correspondence, photographs and more than 80 reel-to-reel audio tapes finds a new home at Emory University’s Manuscript, Archives & Rare Book Library.

Peel (top photo) says Emory was an easy choice and the collection curator says they’re thrilled to have it.

“The collection is remarkable,” says Randy Gue, MARBL’s curator of Modern Political and Historical Collections. “It provides great insight into Atlanta’s response to the AIDS crisis.”

Peel says he decided to place his papers at Emory because “I was impressed by MARBL’s dedication to preserving Atlanta’s history and its desire to include gay and lesbian history. I wanted to be a part of it,” he says.

Peel moved to Atlanta and started a psychiatric practice for gay clients in 1976. Of course, there were no HIV/AIDS agencies at the time. Peel helped found most of the big ones you know today, including AID Atlanta and Positive Impact, when his friends and clients started dying of AIDS in the 1980s. But in Atlanta, grassroots organizing came before that. Peel was known for his parties, and he started throwing them to raise money for the cause. Peel’s ab-tastic pool party fundraisers are still going today.

Among the most moving pieces of the collection are the numerous appointment books Peel kept over the years, including all the names of those he knew who died. Funeral programs were tucked inside the books. There’s also a five-volume set of published journals, transcribed from Peel’s personal diaries, that incorporates photos and other keepsakes.

Peel’s accomplishments and contributions have been recognized by most local LGBT cornerstone organizations. In 2003, he receieved HRC Atlanta’s Community Leadership Award. He received the Atlanta Gay & Lesbian Chamber of Commerce’s Lifetime Achievement Award in 2009, and as a board member of Atlanta Gay Men’s Chorus, Peel received an AGMC Honor in 2010.

Peel is also the subject of the documentary, “In the Eye of the AIDS Storm,” which was screened by Out On Film in 2011. His appearance on LGBT history panels includes the International Oral History Conference, which was held in Atlanta in 2010.

Peel’s papers archive, which is now part of the ever-growing Emory LGBT Collections, is just more icing on the cake.

“The scope and scale of the crisis hits you in a visual way and a concrete way that’s hard to imagine,” the curator tells Emory News.