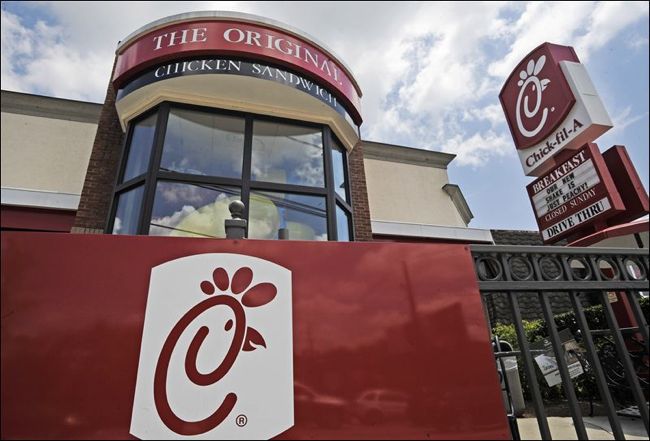 Two Atlanta college campuses stepped into the fray over Chick-fil-A’s diss of “arrogant” gay activists, with Emory chiding the company while some students at Kennesaw State want the chain evicted. The furor over Chick-fil-A’s recent coming out of the closet to proudly embrace its anti-gay antics hits a fever pitch this week. Supporters, backed by former GOP presidential candidate Mike Huckabee, are celebrating Wednesday with “Chick-fil-A Appreciation Day.” Critics of the company are organizing a National Same Sex Kiss Day at Chick-fil-A’s across the country on Friday. In Atlanta, LGBT activists plan to demonstrate at a Chick-fil-A in downtown Atlanta inside CNN Center and one on East Trinity Place in Decatur. The Decatur event is being organized by Gayborhood, a division of gay-owned publishing company Carma Productions. Students at Kennesaw launched an online petition, President of Kennesaw State University: Evict homophobic Chick-Fil-A from KSU's Carmichael Student Center, urging the school to take action against the company. On Wednesday, the petition had 231 out of 1,000 signatures it was seeking. “It is the opinion of many students, faculty and staff members, as well as people in the university's local community that believe that Kennesaw State University must make a choice to either up hold the inclusivity as outlined in their mission statement or to gravely disappoint not only the university's large LGBTQ population, but also the great many faculty, staff members and local community members.,” according to the petition. At Emory, the most gay-friendly college in Atlanta, a school official responded to criticism that it hosts a Chick-fil-A chain by chiding the company but not booting it from Cox Hall. Dr. Ajay Nair, an Emory senior vice president and campus life dean, issued a statement encouraging dialogue on the issue, according to the GA Voice.

Emory University has a long history of creating access, inclusion, and equity for Emory’s gay, lesbian, bisexual, transgender and queer students, faculty, staff and alumni. Recent public statements by Dan Cathy, president of Chick-fil-A, do not reflect Emory’s values as an institution. Nevertheless, freedom of expression and an open exchange of ideas are also central tenets of the Emory community. Emory therefore respects the right of people to express their disagreement with Mr. Cathy by not patronizing Chick-fil-A. Emory’s vision statement calls for us to be 'internationally recognized as an inquiry-driven, ethically engaged, and diverse community, whose members work collaboratively for positive transformation in the world through courageous leadership in teaching, research, scholarship, health care, and social action. It is our hope that our educational environment promotes diversity of thought and encourages dialogue on this issue with the aim of benefiting our local and global communities.

The controversy over the recent statements from Chick-fil-A President Dan Cathy prompted Alex Wan, the only openly gay member of the Atlanta City Council, to express his disappointment and say that he would oppose any expansion efforts by the company in the city. Mayor Kasim Reed declined to comment on the controversy, as has U.S. Rep. David Scott, whose district includes Chick-fil-A’s headquarters. But not "Real Housewives of Atlanta" cast member Kim Zolciak, who expressed her disgust. An Atlanta lesbian couple that includes singer Doria Roberts is offering Two Chicks-fil-A Sunday Brunches at their Urban Cannibals restaurant to combat the chain being closed on Sundays. The Chick-fil-A controversy also prompted 11Alive to find an Atlanta gay to debate the issue.