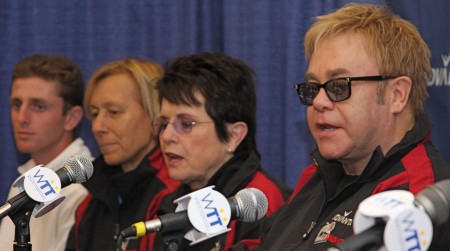 The gay singer, part-time Atlantan and amateur tennis player was in town last weekend to swat a few tennis balls and raise more than $400,000 for the Elton John AIDS Foundation and the Atlanta AIDS Partnership Fund.

John pledged that the funds would benefit HIV efforts in Atlanta and across the South, an area that he’s “distinctly aware” suffers from elevated HIV infection rates. The South is the only region of the U.S. in which AIDS deaths have not decreased over the last seven years.

“All of the money we raise today will stay in the Atlanta area,” John said during a pre-event press conference Sunday. “My organization will look at the grant requests and we’ve given a lot of money to the South this year. As far as my foundation foes, we are aware and not only this event but in future grants requests, the South will be the No. 1 priority.”

John was in Atlanta last weekend for the 16th annual Advanta WTT Smash Hits at Kennesaw State University, which hasn’t been played in his adopted hometown since 2000. John’s event has raised more than $8.5 million since 1993.

On hand with John were lesbian tennis greats Martina Navratilova (photo) and Billie Jean King and tennis pros Andy Roddick (photo with John), Anna Kournikova, Jesse Levine and Melanie Oudin. King and John captained teams that competed against one another in exhibition matches. Team Elton won 23-16 and evened the annual series with Team King at eight wins apiece. (Go here for a rundown on the matches.)

The event raised more than $242,000 during an auction and VIP brunch filled to capacity with 600 people. Co-host Bobbie Bailey opened the auction by announcing a $100,000 donation. Items included a signed piano bench that John used at a recent concert, which sold for $8,500, a trip for two to Beverly Hills for a Women’s Sports Foundation event , which sold for $24,000, two Wimbledon packages with Billie Jean King’s personal Center Court seats that sold for $42,000 and a piece of artwork by Navratilova that nabbed $17,000.

But the auction item that raised the most interest was an hour-long, one-on-one training session with Roddick. John quickly offered $10,000 but then bidding slowed until the auctioneer offered a shirtless Roddick. That brought an $11,000 offer. When the auctioneer joked that Roddick would show “the full Monty,” a woman in the crowd bid $15,000. 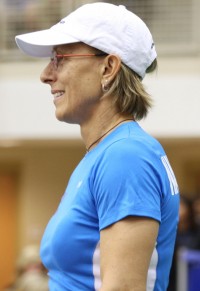 Before the event, John encouraged people to take part in AIDS Walk Atlanta, an annual fundraiser for AID Atlanta on Oct. 19. Organizers hope to raise $1 million for the organization.

“It’s been a part of the Atlanta scene for so long. If we can get any publicity from this event, it hopefully will have an affect and people will go out and walk for AID Atlanta. I really think they should. It would be a shame if people didn’t come out for it. I encourage people and would love for people to turn out,” John said.

“They’ve got nothing else to do – they won’t be shopping, they can’t afford to. Please go and walk,” John added with a laughing reference to the recent global economic turmoil.

John, who has also found success as a Broadway composer, recently announced that he will begin work on a new movie musical for actor Ben Stiller. John has said the work is “about a guy on Broadway who is gay, has HIV and AIDS, and has to go back and face his wife and his kids that he left. It’s very funny.”