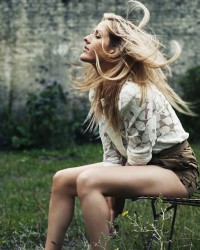 Ellie Goulding has made a big splash on the music scene with her debut album “Lights.” Now she kicks off the Lights Tour in Atlanta on July 23, and she took time out to psyche us up for the concert.

In 2009, Goulding (photo) hit Britain’s popular consciousness like a blitz bomber, and the album soon followed in 2010. Goulding’s blend of pop, dance and folk was the fastest selling debut album of the year in the U.K. and earned her a BRIT Award. Now fans here are starting to take notice as well.

After a brief jaunt in the U.S. earlier this year, she returns with even more buzz behind her this summer. The Lights Tour spans 14 cities in the U.S. and Canada, and we caught up with her as she made final preparations for the visit.

Project Q Atlanta: What was your impression of the U.S. during your first tour?
Ellie Goulding: Many, many things struck me about America – politeness, enthusiasm, energy in a lot of the fans I met. I also couldn’t process going from places like Texas up to Boston. The weather, the scenery and the accent – it wasn’t like being in the same country, ever! I did miss a few home comforts, like a really good cup of tea.

How will your second tour of America differ from the first?
I feel more prepared this time, like I almost know what to expect. Last time I was in the States, it was a lot to take in in six weeks and I worked really, really hard. I was meeting about 200 fans a night, plus in stores, acoustic radio sessions, and doing a show every night, and I was shattered. But it was completely worth it and I enjoyed every second.

What made you pick Atlanta for the first city this time around?
I am excited to be in Atlanta. I’ve heard great, great things, but I don’t know why it was picked as the first city. I guess this time around, I’ll be visiting a few places I haven’t been before, and it’s going to be awesome.

Do you have any sites you hope to catch during this tour?
Whatever I can in the time I have. I didn’t get to do much tourist stuff last time, so I really hope I get a chance to explore this time. It’s important I think to concentrate and focus on the task at hand, which is blowing up in America, but also to pick up experiences and have adventures along the way.

Describe your relationship with your gay fans. Is it different from other fans?
I know that I have a lot of gay fans, and when I meet them they tend to be way more tactile and hands on, which I love because I’m really cuddly. Girls have chased me down the street before saying quite explicit things, but I just find it hilarious, they’re really good craic [Irish slang for “good fun,” pronounced “crack”]. One of my good gay friends was actually a huge fan in the beginning and made me laugh so much that I gave him my email address.

It’s been quite a ride since your debut album with big performances like “Saturday Night Live” and the royal wedding. What is next after this tour?
Completing immersing myself in the new album. Nothing else will take priority.

What can you tell us about the follow-up to “Lights”?
I can’t say much other than I sense already a change in tone and dynamic. I will always make pop music, but how I choose to present it will always change I think. I still hope to be banging my drum and plucking my guitar at 60!