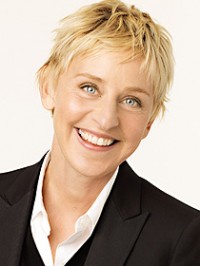 Paula Abdul should just kick herself. Whether she left ‘Idol’ on ‘principle’ or not, she can not only be replaced by someone with no music industry background, but by the star power of Ellen DeGeneres.

Yep, Degeneres signed on to become the fourth ‘American Idol’ judge in the fall season, Fox announced yesterday. She will extol her opinions alongside the venerable Simon Cowell and Randy Jackson, as well as last year’s well-chosen addition, Kara DioGuardi.

Fans of “So You Think You Can Dance” got a taste of Ellen’s judging ability when she guest-starred on that show’s summer season. Her comments included, “You must be a carpenter, because you nailed it!” As if she’d know.

While funny and endearing in that oh-so-Ellen way of hers, DeGeneres certainly didn’t bring any professional expertise to the ‘SYTYCD’ panel. And apparently, she doesn’t need to. Her lovability must transcend such minor details when it comes to ratings. Not that ‘Idol’ needs a boost in that arena, but it can’t hurt.

Let’s face it. She has to be more coherent than Paula in the base case.

We’ve come a long way since Ellen and her sit-com character simultaneously came out as lesbians in 1997, followed quickly by a dogged public relationship and breakup with actress Anne Heche. Of course, DeGeneres’ career has skyrocketed after what seemed to be a major career-breaker at the time.

She hosted the wig-pulling ‘Real Housewives of Atlanta’ on her highly rated daytime talk show this week. With that, her hosting spots on primetime awards shows, a rock-steady marriage to hottest-lesbian-ever Portia de Rossi, and now a weekly spot on the No. 1 show in America, it appears DeGeneres can do no wrong in Hollywood. You go, girl!