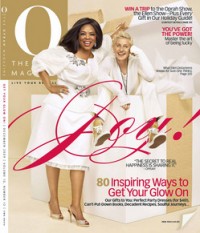 In the December issue of O Magazine, Degeneres, already the second lesbian to make it in Daytime, also became the second person ever to grace the O cover with Oprah (top photo). Yes, even Michelle Obama had to share the limelight with the real Big O when the undisputed Queen of the World realized that promoting her esteemed connections by sharing the cover with the First Lady would be in her own best interest.

In what started as a running gag on “The Ellen Degeneres Show,” the comic-turned-daytime phenom started a joke “campaign” to be on the cover of Oprah’s inexplicably popular magazine.

Well, score one for Ellen. She got the cover. Oprah even appeared by satellite on Ellen’s show to offer the invitation.

But it’s clear who’s on top. You can just imagine the wheels spinning in Oprah’s offices.

“Ellen is using our name and getting press for it. How can we make this about Oprah? How can we heap more money on top of our shit-ton cash pile?”

The answer became clear: Glom onto Ellen’s laughs and measly millions of viewers by just giving her the damn cover—with a couple of money-making caveats.

1. Ellen and wife Portia de Rossi would appear on Oprah’s show in an exclusive first interview together.

2. In return, Oprah would appear on a stage monitor on Ellen’s show for less than a minute to “invite” her to do the shoot.

3. Two covers will be released—both with Oprah as the central figure. One for subscribers (top photo), and a second for newsstands so that collectors will have to buy both.

4. Ellen would push her show’s viewers every day to set the record for O magazine’s highest-selling issue ever.

5. Ellen would appear with Oprah in Chicago to sign copies of the issue in front of thousands of fans and hundreds of press outlets.

Sure, Ellen. You can be on the cover.

The Ellen and Portia episode of Oprah aired Monday, an hour-long production that included at-home footage and painfully obvious questions on the couch. At the same time the show was broadcast, Ellen was in Chicago signing copies of the magazine with Oprah.

So, with hosting gigs on huge awards shows, her own Cover Girl campaign, and as the new judge on “American Idol,” Ellen’s come a long way from “Yep, I’m gay” to “Yep, I’m rich and famous.” Her creativity got the first giggles on Oprah, and her show certainly received a little boost.

Portia even got her cut. Tuesday headlines included one revelation she made to Oprah during the show about coming out as a lesbian and as Ellen’s love interest.

But as always, it pays to be at home with the O. In the end, Ms. Winfrey gets the last laugh and the lion’s share of the profits.

If you’re one of the gays that can’t stop crying during Oprah and can’t stop laughing during Ellen, here’s a video that recaps the months of build-up, the invite, the final unveiling of the cover, and the promo spot for the Oprah episode.