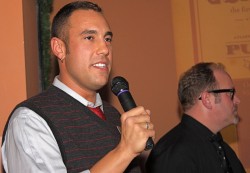 Two LGBT activists are exploring an effort to create a “first class community center” in Atlanta and have invited a group of fellow activists and community influencers to discuss the idea tonight.

Justin Ziegler (photo), executive director of the Atlanta Executive Network, and Realtor Barb Rowland are hosting the meeting today at 6 p.m. at Mixx as a way to reach out to community leaders and solicit feedback for what they say may be a three- to five-year process to plan, fundraise and build an LGBT community center.

In a recent email, Ziegler and Rowland cite “the need to have a safe place to gather that is centrally located and filled with resources for all parts of our community.”

The effort already has a Facebook page called “First Class Gay Community Center in Atlanta… why not?” that touts facilities in Chicago and Los Angeles as examples for what could be created here. In a post to the page’s Discussion Board, organizers include mentions of possible sites in Atlanta that range in price from $1.95 million to $6 million.

Other posts provide a mix of opinions, from enthusiastically supporting the effort to warning that it could “consume already limited resources.” The executive directors of Georgia Equality and the Atlanta Lesbian Health Initiative also point to the facility they share on DeKalb Avenue, the Phillip Rush Center. The space was named for Rush, an LGBT activist who died in 2009, and is the home for a handful of gay organizations and also serves as an event space for several other groups.

Jeff Graham, Georgia Equality’s executive director, says in a post to the discussion board that the Rush Center was launched to provide a meeting place for LGBT organizations.

When we formed this partnership last year, part of our vision was to create an incubator for a larger and more comprehensive center in the future. If there is enough community interest and people committed to raising the necessary funds, it is conceivable that in the coming months, we could expand the current Rush Center to accommodate additional office and community space. Our intention has been to expand without burdening any one organization with massive financial risk or diverting scare resources from essential services.

Linda Ellis, ALHI’s executive director, writes in a post that LGBT centers in other cities “enjoy a level of local and state government support ($$) that we can’t (at least for the foreseeable future) count on.”

Ziegler writes that the effort to create a new facility won’t impact the Rush Center.

The Rush Center has been an amazing project and the intention here is not to derail it’s success in any way. This plan is about taking an existing idea and pushing it to the limit.

An effort to craft an LGBT community center at a house on 11th Street in Midtown several years ago failed after struggles over financing and staffing.

What’s your take? Does Atlanta need an LGBT community center? Where will the money come from? Should support coalesce around the Rush Center instead? Leave your comments below.