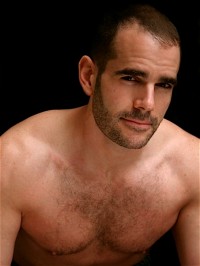 We like astute. We love acerbic. We adore sexy. So it’s little wonder that the Tuesday stand-up act and Wednesday book signing by comic Eddie Sarfaty (photo) have us on the edge of our seats.

Sarfaty’s biting comedy effortlessly captures the everyday absurdities of life, blending self-deprecation and sarcasm with a razor-sharp instinct for the ridiculous.

In “A Night of Homo-neurotic Comedy” at Actor’s Express on Tuesday, as well as the Wednesday presentation of his book “Mental” at Outwrite, Sarfaty lets us in on his life in explorations of career lows, cheapskate exes, the wonder and hell of family, psychopathic felines, and so much more.

Whether recounting a family trip to Paris, where his ailing father shouts obscenities at the Mona Lisa, or discovering his mother surfing?JewHunt.net in search of a mahjong á trois, Sarfaty excels at lovingly mocking his family.

But he’s just as quick to make fun of himself and his own misadventures. In the act and in his book, he recounts darkly funny experiences that include taking Ecstasy before lunch with Hillary Clinton, and a one-night stand whose fondness for balloon animals would have animal activists up in arms. 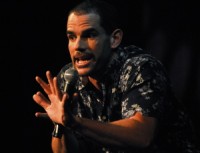 Sarfaty is a natural storyteller, and his candid, caustic wit is surprisingly poignant. The humor in his work proves just as endearing and hilarious in print as it is onstage.

He has appeared on “The Today Show,” Comedy Central’s “Premium Blend,” Logo’s “Wisecrack,” has been a featured performer for Atlantis Cruises and RSVP Vacations, and can currently be seen in the documentary, “Laughing Matters…The Men” (bottom photo).

Among many stand-up gigs and faculty positions teaching writing at New York University and The Theatre Lab in Washington, D.C., Sarfaty is also the newest member of Provincetown’s troupe Funny Gay Males.

Here’s a quick taste of his act from Logo: