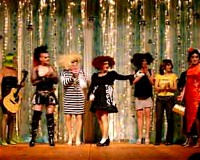 Nothing draws the masses in the LGBT-ATL quite like a baudy-as-hell camp drag show for charity. Accordingly, no event raises more money for Atlanta Pride than the annual East Point Possums Show set for Saturday.

The 13th annual show featuring current performers, retired professionals and crowd favorites who were born on and can only be found on the East Point Possums stage once a year is the first of six official Atlanta Pride Stonewall Week events.

“You never know what you will see,” Rick Westbrook, Possums Matriarch and co-founder, says in a prepared statement.

“We have had drag queens on roller skates, grandmother’s pulled up on stage from the audience, and first-time performers who have gone on to become contest winners garnering national titles,” he adds. “The 2010 event promises to bring more of the same excitement and entertainment that the show is known for.” 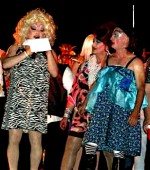 This year’s event once again benefits Pride, the Southeast’s largest, set for Oct. 9-10. To add to the giving spirit, the Possums also gives a cut to the Atlanta Lesbian Health Initiative this time around. The groups will be on hand to sell tickets and staff the beverage booths. All proceeds go to the beneficiaries and to the Possums for their charity work.

“The Possums Show is not only a lot of fun, it’s our single largest fundraiser of the year,” says JP Sheffield, executive director of Atlanta Pride.

In short, the East Point Possums show has become a local legend, doing good in the neighborhood while providing the most fun you can have with your clothes on — well, most of them any way. With an all-night revelry rarely matched, dress up to mess up with this partial list of a literal slew of confirmed acts: