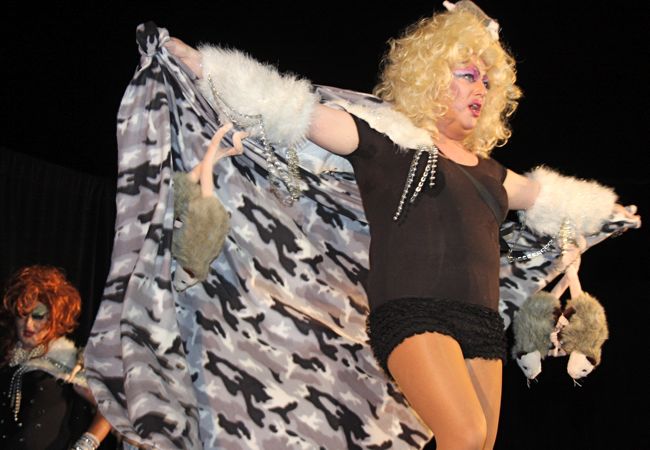 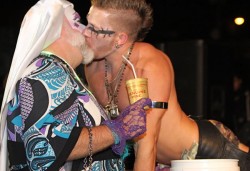 Hundreds of people helped raise thousands of dollars for two LGBT non-profits during a bawdy and fun drag extravaganza on Saturday in East Point, making the burb south of Midtown the gayest place in metro Atlanta — at least for a few hours.

Nearly-three dozen performers took to the stage over three hours Saturday evening for the 13th Annual East Point Possums Show, an event that started in 1998 with four friends performing during an informal evening. 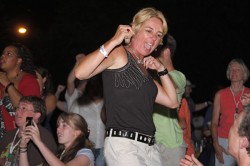 The cast ranged from well-known performers such as Alexandria Martin — who performed with a kiddie pool attached as a skirt — to newcomers such as Mimi Simone, Coochie Gabana and Miss Behave. There were sentimental favorites, such as the East Point Villagers and the East Point Possums, as well as soon-to-be classics like the Order of the Flaming Sugarbakers.

The crowd, which ranged in estimates from 400 people to about 1,000, helped raise nearly $10,000 that will be split among Atlanta Pride and Atlanta Lesbian Heath Initiative. The show also served as the kick off to Stonewall Week, a series of events to commemorate the anniversary of the 1969 Stonewall Riots. 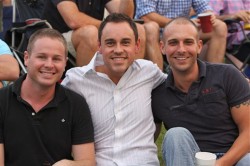 “You never know what you will see,” Rick Westbrook, Possums Matriarch and co-founder, told Project Q Atlanta ahead of the show.

“We have had drag queens on roller skates, grandmother’s pulled up on stage from the audience, and first-time performers who have gone on to become contest winners garnering national titles.”