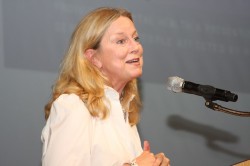 Four early leaders in Georgia’s fight against HIV/AIDS gather on Thursday to trace the impact of the virus in the state and share their stories from their days on the frontlines of the epidemic.

Jim Martin, Sandra Thurman (photo), Bruce Garner and Nancy Paris will take part in the forum at the University of Georgia’s Paul D. Coverdell Center for Biomedical & Health Sciences, a part of the AIDS Legacy Project. Martin is a former state legislator who helped secure some of the first public funding in the state to combat HIV; Thurman is President Clinton’s former AIDS czar and a past executive director of AID Atlanta; Garner served on the board of AID Atlanta and works with the National Episcopal AIDS Coalition and the Commission on AIDS; and Paris is a former AID Atlanta president with a lengthy track record of working community-based health organizations.

“How Georgia was able to face the AIDS epidemic in the early years is an important part of our history,” Martin says in a prepared statement about the event. “It is worth retelling the story of how issues associated with this epidemic — including sexual orientation, drug abuse, prejudice and public health — were effectively addressed by community leaders with courage, vision and compassion.”

Thursday’s event opens at 5:30 p.m. with Martin, Thurman, Garner and Paris tracing the impact of HIV in Atlanta and the community’s initial response, as well as discussing their vision for the future of the fight against HIV/AIDS. A reception will follow.

The AIDS Legacy Project is working to record the oral and written histories from AIDS activists who led the initial response to the HIV/AIDS outbreak. It includes an archive created from interviews with people who set up the initial system of care for people with HIV. The project also traces the creation of AID Atlanta.