Just a handful of people took part in an underwear protest on Wednesday in Midtown, the third rally in the wake of the Atlanta Police Department’s raid of the Eagle six weeks ago. 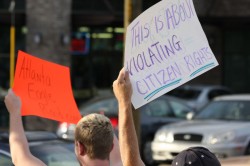 But Robert Kelley, an Eagle co-owner, says that despite the low turnout, the protest helps keep attention focused on the raid.

“We’re trying to keep everybody thinking about it instead of going, oh well, it’s been over a month and nobody cares anymore,” Kelley said at the protest.

Crowds have dropped at the Eagle since the raid, an impact that’s taking its toll on the long-standing gay bar, Kelley said.

“We’re getting a lot of support, don’t get me wrong, but the support needs to also be come in and buy a drink. Come in and support the employees. We have employees right now that are having their gas and electricity cut off because they can’t pay their bills because nobody is coming in and buying a drink. It is affecting long-term the Eagle, not just the community, but the Eagle,” he said. 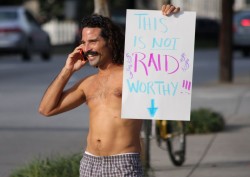 The raid resulted in eight arrests, two protests, calls from elected officials and political candidates for an investigation into police tactics, a public forum with police and LGBT activists and a public flap over grand marshals for the upcoming Pride parade.

On Wednesday, less than a dozen protestors carried signs and walked the intersection of 10th Street and Piedmont Avenue during rush hour. Some wore boxers or less over their jeans to protest the raid and recall the Eagle’s popular Thursday Underwear Nights. The bar was raided on a Thursday night and dancers in their underwear were arrested. 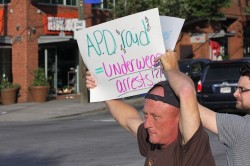 Attorney Daniel Grossman, who attended the protest, has joined with the Eagle to launch a website about the raid. The site asks for patrons at the Eagle during the raid to come forward to join possible legal against the city and provides instructions on how to file a complaint against the police department.

The Atlanta Bucks Rugby Football Club, a long-time supporter of the Eagle, is hosting an appreciation night at the bar on Friday beginning at 11 p.m.

View the Project Q Atlanta photo album from the protest or read our full coverage of the raid and its aftermath.