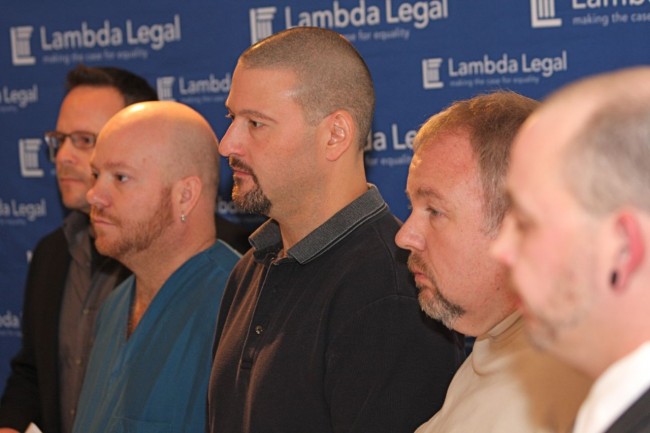 Some 19 people detained during the Sept. 10 raid of the Atlanta Eagle fired back Tuesday, filing a federal lawsuit against the city, its police chief and four-dozen officers claiming violations of federal and state laws.

The civil rights complaint seeks a judicial order to change the Atlanta Police Department’s procedures concerning raids and unspecified monetary damages to compensate patrons for false imprisonment, assault, battery and trespass. Plaintiffs in the lawsuit include patrons who were searched and detained during the raid, though only one of the eight employees and dancers who were arrested. 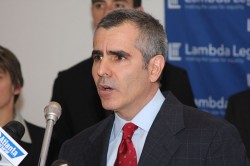 “Every first-year law student knows that police cannot stop you, search you and detain you without at least some reasonable belief that you have done something wrong or committed some crime,” says Daniel Grossman (photo), an attorney handling the lawsuit. “I just couldn’t believe that police officers would have just a callous disregard for people’s basic constitutional rights. When police don’t follow the law, it’s a really scary thing.”

Grossman joined with Greg Nevins, supervising senior staff attorney with Lambda Legal’s Southern Regional Office in Atlanta, and Gerry Weber, senior staff counsel at the Southern Center for Human Rights, in announcing the lawsuit Tuesday during a press conference in Midtown. Also on hand were several Eagle patrons ensnared in the raid and Richard Ramey, one of the bar’s co-owners.

The raid resulted in eight arrests, three protests, calls from elected officials and political candidates for an investigation into police tactics, a public forum with police and LGBT activists and a public flap over grand marshals for the Pride parade earlier this month.

“Innocent citizens should not be treated like criminals and that is what this case is about,” Weber says.

Nevins calls the Eagle patrons “courageous for stepping forward.” He says customers heard anti-gay slurs and complained of mistreatment by officers during the raid and criticized the police department for its tactics and approach to bar raids.

“This time it was a gay bar in Midtown, but the police have made it clear they will go into any bar and do this. They will do this to anybody in the city because that is their standard operating procedure. There is no doubt that they probably have gone into places where they thought people wouldn’t fight back. You have a lot of courageous people in here who are fighting back,” Nevins says.

Top police commanders and several gay officers defended the agency and its approach to the raid during a public forum Oct. 5. Deputy Chief Carlos Banda said officers follow department policy in conducting identification checks of people detained in raids and backed the agency’s handling of anonymous complaints, two of which led to the undercover investigation at the Eagle that culminated with the Sept. 10 raid.

“Should we be doing operations like that? As long as citizens make complaints, we have to look into it. We really don’t have a choice. Whether we like the law or not, we have to enforce the law equally and that is the most important part – equally,” Banda said during the Oct. 5 forum.

Attorneys who filed the lawsuit Tuesday took issue with those statements.

“We are representing some courageous people who are standing up to say, ‘enough is enough’ and making sure that the Atlanta Police Department, who is charged with making us safe, actually obeys the law itself,” Nevins says.

Four plaintiffs in the lawsuit also spoke Tuesday, describing in detail the raid and why they joined the federal lawsuit. Geoffrey Calhoun, a police dispatcher in metro Atlanta, was enjoying a beer and video games at the Eagle when the raid unfolded. 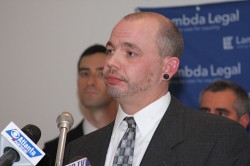 “I am not doing this because I have a vendetta against the police,” Calhoun says (photo). “Atlanta has a reputation and it seems like their policies violate constitutional law and it needs to stop. It doesn’t need to go any further. People need to stand up and realize that silence is no longer an option.”