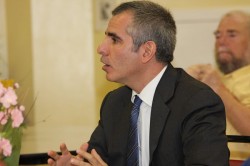 The lead attorney for the men suing the City of Atlanta and its police department over the botched Eagle raid says Mayor Kasim Reed’s attempts to end the legal fight are misguided.

Dan Grossman (photo), the most visible of the three attorneys who filed the lawsuit, told WSB Tuesday that Reed sees the raid and the lawsuit as a gay problem, not a wider one impacting how the Atlanta Police Department protects and serves the entire city.

Grossman believes that indicates that Atlanta Mayor Kasim Reed considers the Eagle raid controversy as an issue affecting only the gay community.

According to Grossman, “This is the Atlanta police force that’s responsible for the Kathryn Johnston killing and many other problems over the last few years. The mayor seems to think that the only problem with the Eagle raid is that gay people in Atlanta don’t like him anymore. And the problem with the Eagle raid is that the mayor had dozens of police officers break the law.”

On Oct. 28, Reed announced the creation of a blue ribbon commission to mediate a “just and right” end to the lawsuit. His announcement came during an appearance at the 16th Annual Stonewall Bar Association Awards Dinner. Reed’s announcement included few details about the blue ribbon commission, how it will be empowered to mediate, the number of members or whether Reed will be involved.

The mayor did name four members of the commission – LGBT attorneys Lawrie Demorest, Jeremy Burnette, Burton Tillman and Lee Schrader – but declined to answer questions about the panel after his announcement.

Grossman told WSB that the conduct of the police department impacts everyone in Atlanta, not just the city’s large gay and lesbian population.

“It’s very important when police officers break the law for the mayor as head of the city to discipline them and send them a message that the city expects them to follow the law.” said Grossman.

Reed said during an Oct. 21 appearance at the Atlanta Executive Network that he’s growing increasingly frustrated that the lawsuit and continued fallout from the Eagle raid is overshadowing his other LGBT initiatives. He made similar comments during the Oct. 28 appearance.

But Grossman has said that Reed and city attorneys rebuffed attempts earlier this year to settle the case. On Oct. 21, Reed said there’s been no offer to settle the suit, though he’s open to entertaining settlement discussions.

“If I were to apologize as mayor, there is real concern that other people could file a lawsuit based on my apology. If I stood up and apologized, the people who were in the room [during the raid] could then go and file a lawsuit. This is not as easy as it looks,” Reed told AEN.

“I am saddled on one side with legal counsel and with the possibility of having to write a significant check and the other side where my heart is,” he added.

Despite Reed’s comments, city attorneys continue wrangling with Grossman over his allegations that the city is ignoring court-imposed deadlines, destroying evidence, failing to maintain evidence and delaying discovery in the matter.