All but one of Eagle 8 cleared in trial Thursday

An Atlanta judge capped a crumbling case against the Eagle 8 on Thursday, handing down not guilty verdicts to the three men still facing charges related to the raid of the Atlanta Eagle last September.

The verdicts from Municipal Court Judge Crystal Gaines cleared the remaining charges after a day-long trial that included senior assistant solicitor Larry Gardner dropping charges against four of the men, clearing them from the case, and one of two charges against Eagle co-owner Robert Kelley.

Charges were dismissed against doorman Ernest Buehl, manager David Shepherd, bartender Chris Lopez and dancer Robert Kline as the trial progressed. Kelley also had one of two charges dismissed as the Eagle 8 attorney, Alan Begner, was mid-way through his closing argument. 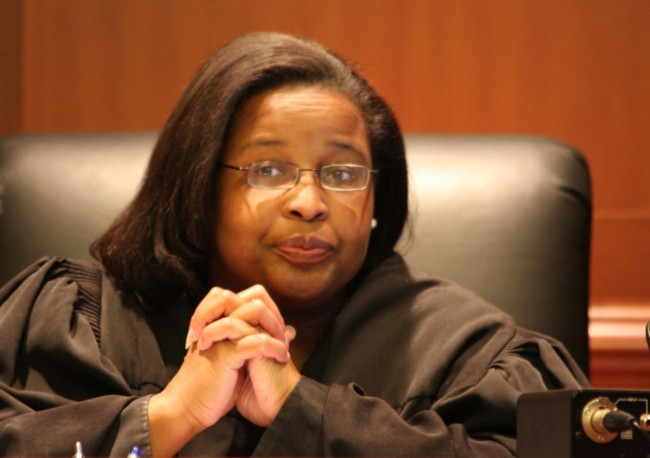 Gaines (second photo) later delivered not guilty verdicts to Kelley on his remaining charge, and dancers Leandro Apud and Thdareius Johnson. Anitonio Benitez, who was a also a dancer cited during the raid, did not appear in court Thursday and faces a bench warrant for his arrest.

“We knew we didn’t do anything wrong and we were very happy with the results,” Kelley said to a pack of reporters on the courthouse steps after the trial. “All I know is that there should be a good party tonight at the Atlanta Eagle. I’m stressed and may have to take the night off and have a shot of tequilla myself.”

Begner said the city’s case against the Eagle 8 was “weak from the start” and was an effort to justify “heavy-handedness” on the part of the Atlanta Police Department, which conducted the raid on the bar.

“To me, this is less about a message than defending people wrongfully accused and it feels good,” Begner said. “You don’t always successfully defend people wrongly accused. We did this time and we had a judge who stood up for what was right.”

“The outcome suggests that the underlying reason for all of this was no reason,” he added. “Not only were eight people arrested and instead of cited, they didn’t have a bond for this offense at the jail because no one’s ever arrested for it. This shows there was no reason to arrest them at all.”

Gardner left the courtroom with Det. Bennie Bridges, his chief witness and lead investigator in the raid, immediately after the verdicts. He declined to comment.

Trial opens with one charge being dropped

Charges against one of the Eagle 8 were dropped during a trial Thursday morning, while another man faces arrest for failing to appear in court.

After an initial delay, the trial of the eight men arrested in the Sept. 10 raid of the Eagle opened in Atlanta Municipal Court. Charges against Ernest Buehl, a doorman at the time of the raid, were dropped as the prosecutor in the case, Larry Gardner, struggled with having his witnesses correctly identify the seven defendants seated in the courtroom.

The charges being dropped against Buehl came near the end of about two hours of the proceeding, which included brief opening arguments from Gardner and defense attorney Alan Begner, and testimony from two police officers involved in the raid.

At the close of the prosecution’s case, Begner asked Judge Crystal Gaines for a directed verdict, arguing that the men were charged incorrectly by officers the night of the raid. Gaines demurred until after a lunch break. The trial is scheduled to resume at 2 p.m.

Gardner, when asked why he dismissed the charges against Buehl, said, “I used my discretion.” He declined further comment.

Begner also declined to comment about the charges being dismissed.

Before opening arguments, Gaines issued a bench warrant for Anitonio Benitez, a dancer charged during the raid who failed to appear in court Thursday.

Delay in opening of Eagle 8 trial

The Eagle 8 returned to court in downtown Atlanta Thursday, only to face another delay to the start of their trial on charges stemming from a controversial raid at the Atlanta Eagle.

The trial was scheduled to open at 8 a.m. Thursday, but Judge Crystal Gaines (top photo) delayed opening arguments until 10:30 a.m. shortly after arriving in court. Gaines provided no explanation to the eight men facing trial, the police officers expected to testify or the crowd of about two-dozen people in the gallery.

The trial is expected to begin on what is the six month anniversary of the Atlanta Police Department’s raid of the gay bar on Ponce de Leon Avenue in Midtown.

Gaines has delayed the trial before, most recently setting it back five weeks in late January.

A steady rain helped dampen plans for supporters of the eight men and the bar to gather at the courthouse steps Thursday morning.

Benitez did not appear in court Thursday morning and Gaines threatened to issue a warrant for his arrest if he did not arrive when opening arguments begin at 10:30 a.m. 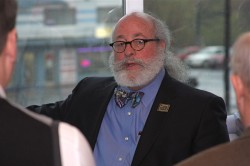 Alan Begner (bottom photo), an attorney for the Eagle 8, has said he expects to call dozens of witnesses in the trial.

“There’s a lot to prepare for in terms of having so many witness, but I am looking forward to trying it,” Begner says. “We intend to call as many people who were patrons and who we can get there to testify. If I can call 62 customers in to testify, I would put them all on. I think they saw the same thing.”

Begner says patrons of the bar on the night of the raid will corroborate what the eight men on trial have maintained – nothing illegal was taking place, and that if something was amiss with licenses for the dancers or employees, they should have been cited by the city’s licensing and permits unit, not arrested by police.

On March 1, the Atlanta City Council’s Committee on Council voted unanimously to issue subpoenas to 18 police officers as part of an investigation into the Eagle raid.

The action by the six-member Committee on Council was an effort to break an impasse that has stalled the investigation by the Atlanta Citizen Review Board, which recently complained that the Atlanta Police Department was stonewalling its probe into the raid and other complaints of police misconduct.

Mayor Kasim Reed weighed in on the matter last month, expressing concern that officer testimony before the ACRB could imperil the City of Atlanta’s defense in a federal lawsuit filed in the wake of the Eagle raid.

The raid also faces an internal investigation by the Atlanta Police Department.

Check Project Q Atlanta throughout the day for updates from the trial.