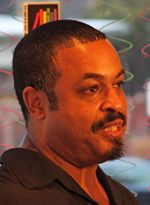 Gay author E. Lynn Harris read portions of his novel, “Just Too Good to Be True,” to a packed crowd at Outwrite Bookstore & Coffeehouse on Wednesday.

The book, billed by Harris as about “football, family and secrets,” adds to the author’s collection of nine novels and a 2004 memoir.

Harris talked with Southern Voice for a profile earlier this month.

“I’m still very, very thankful and dependent on my gay readers. I don’t want them to think for one minute that I have abandoned them,” Harris says, noting that his next book, due out in January 2009, is a “totally gay story” called “Basketball Jones.”

For a gallery of photos from the event, go here.