E. Lynn Harris’s is dead, but franchise lives on 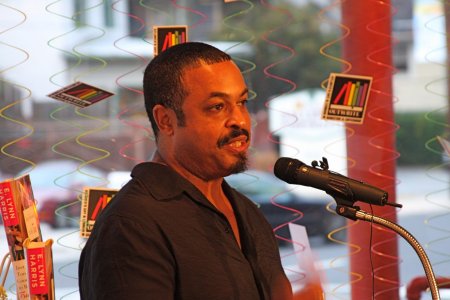 Even in death, gay Atlanta author E. Lynn Harris is a rainmaker.

The prolific writer — his work includes 12 books with two more to be released soon — left behind a franchise that could reach $100 million to $250 million in motion pictures, television movies, DVDs and musicals. That would put him in the ranks of fellow Atlantan Tyler Perry, a movie mogul who knows how to work a franchise. (And work it.)

Harris died July 23 while on a West Coast swing to negotiate getting his work to the silver screen. Though a heart attack cut short Harris’ work to expand beyond his novels, BET says the author who “adeptly explored the intersection of race, sexuality and spirituality” will be turned into a franchise if his estate and executors can “traverse the landscape in the entertainment industry.”

“Getting there is going to be the tricky part,” explains famous Hollywood attorney Nina Shaw. She cautions that the “upswing” can be achieved, but it will depend chiefly upon “how strategic and how sophisticated his estate and executors ultimately are in their ability to traverse the landscape in the entertainment industry.” She adds that much like Tyler Perry’s work, Harris’ books come with a built-in audience and it will be a process to convince Hollywood that his audience already exists and can be extracted.

Marva Allen, managing partner and co-owner of the Harlem-based Hue-Man Bookstore, knows firsthand the strength of E. Lynn Harris’ brand. “He had a huge female following. More followers than I can remember of an author in a long time.” She added that Harris “touched a genre that needed to happen in Black America. He had a great cross-section of people who loved his work. There’s definitely an audience for his books if made into films.” Allen also reports a huge surge in book requests since the author’s death.

BET also says that a new Harris novel, “Mama Dearest,” is due out in September as a follow up to “Not A Day Goes By.” Next year, expect the arrival of “The Bentley Chronicles.”

With multiple creative irons in the fire, was Harris finally able secure a franchise film deal with television and Broadway musicals attached?

“The answer is complicated,” says the source. But in the next few weeks, he says, fans of E. Lynn Harris’ work may finally get news on the film adaptation of a genre of fiction that literally knocked down taboos and transcended stigma in order to become part of the social fabric of Black America.