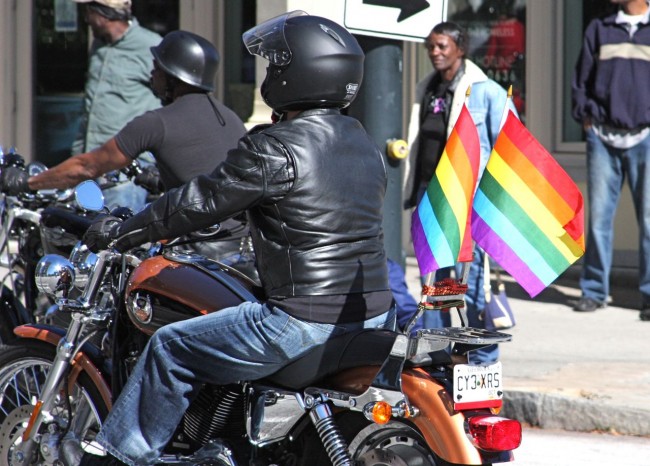 Dykes on bikes — the motorcycle variety — and a few men, too, provided the traditional start to the Atlanta Pride Parade Nov. 1.

They roared through the streets of Midtown along the parade route with police choppers and even a scooter or two in tow. With the motorcycles getting washed out of the annual Dyke March the day before, the parade provided the only chance to catch the powerful machines. Big ones, ones with side cars, some with chrome and others adorned with Pride flags all received a warm welcome along the parade route. 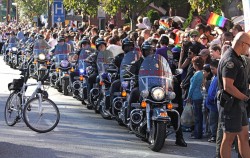 The police choppers, sometimes used to push the crowd out of the street and back to the sidewalk, proved useful during a stretch of the parade on 10th Street across from Blake’s about 2:40 p.m.

That’s where a small group of anti-gay protesters, led by a man with a megaphone, taunted the crowd with signs and chants including “don’t make a moral wrong a civil right!” and “homosexuality is sin!” When parade participants with Bud Light placards emblazoned with slogans including “equality,” “stop hate crimes” and “transexual rights” spotted the protesters, they stopped, turned and tried to shout them down.

When the shouting grew heated, officers along the route called for additional support. A few moments later, the contingent of motorcycle officers appeared, lights flashing and sirens blaring. They stopped in front of the anti-gay protesters and the noise drowned out their jeers (photo).

View the Project Q Atlanta photo album of motorcycles from the Pride parade.