Dykes, bikes and a brief history of women riding motorcyles 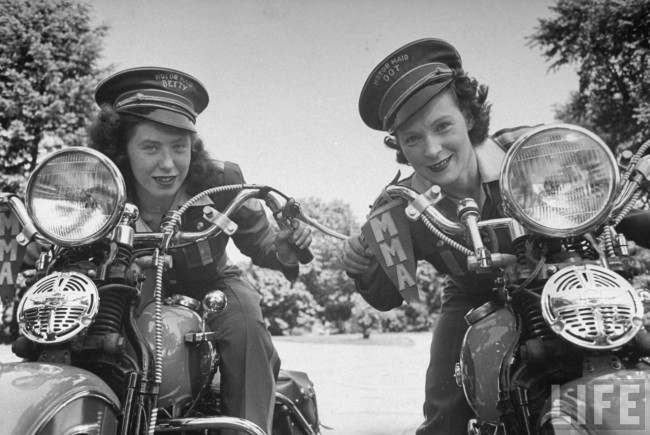 Are biker babes hot? Yeah! Do they throw whips? Some do! Should you be one? Yes.

The problem is that many women are afraid to ride except as a passenger. What does this mean for Dykes on Bikes® in Atlanta?

Well, for starters we only have so many passenger seats. We cannot possibly fit all your rears on our 70-ish bikes.

Second, we need younger women to step up and ride. Millennials? Gen Z? Where are you? Motorcycles have been empowering women since the 1800s, but our group is mostly made up of badass Boomers and Gen Xers.

Gottlieb Daimler (Daimler Motors, Daimler Benz, et al) made a bicycle with a locomotive engine. People used them for transportation like we use cars. And women were riding them. Without stigma! Can you imagine? In bustles and corsets, even.

Note to femmes and cosplayers: I wear corsets and have ridden in one. It’s comfortable. I also ride in my Batwoman cape when appropriate. You can do this! Get a bike!

Effie Hotchkiss becomes the first woman to ride across the U.S. on a motorcycle. Most women didn’t travel distances without an escort, let alone on a three-speed motorbike, but Effie plopped her mom Avis in her sidecar, and off they went!

Dot Robinson competes alongside men in motorcycle endurance races… and wins! She forms the world's first women's motorcycle club: The Motor Maids. She wears tons of leather gear, but switches to pink gear at some point so she wouldn’t feed the troublemaker stereotype.

Bessie Stringfield becomes the first African-American woman to ride cross-country, and she does it solo.

Bessie learned to ride on an Indian Scout at age 16. She traveled all of the lower 48 states and across Europe, Brazil and Haiti. Bessie was one of the few civilian motorcycle despatch riders during World War II.

World Wars I and II

Hints of the leather culture started around 1918, just after World War I. Pilots coming home from the war kept their leather jackets and caps, and men turned to the thrill of riding motorcycles. That led to some hot gay action, but gay men weren’t the only ones shaped by the wars.

Throughout both World Wars, women served hard. We became machinists, mechanics and more. In America, Rosie the Riveter is the most iconic representation, but some women embraced a more masculine tone, wearing “men’s clothing” with their hair slicked back.

Despatch riders delivered urgent communications between headquarters and military units. They rode through bombing campaigns and raids. They maintained their own machines. It was gritty, hard work on some damn heavy machines in extreme circumstances.

San Francisco’s Gay Freedom Day Parade. A small group of lesbians decided to ride in the parade. So that their bikes wouldn’t overheat idling behind marchers, they moved to the front of the procession and have been there ever since. From what we understand, someone in the group or in the crowd called them “Dykes on Bikes.” A San Francisco Chronicle reporter picked up on it, and the name appeared in print.

Fast forward to present day. This year is the 50thanniversary of the Stonewall uprising. Does the meaning of that affect us the way it used to?

It does for Dykes on Bikes.

Motorcycling connects us to something greater than ourselves. We feel it every year when we open Pride and connect with your beautiful, smiling faces during the parade. We’re planning something special to honor Stonewall this year, and we hope you’ll love it. Bring your smile and your new bike.

This column originally ran in Q magazine. Read the latest issue below for even more.