Now for the most ridiculous item of the day.

“The Real Housewives of Atlanta” co-star Dwight Eubanks and best friend to breakout reality star NeNe Leakes has confirmed to Essence Magazine that he is engaged to be married to — drum roll please — a biological woman. 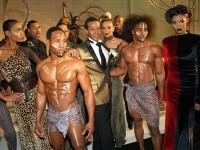 Although a date has not been set, Dwight’s bride-to-be has no qualms about his appreciation for both sexes. And it hasn’t stopped other women from pursuing the hairstylist and divo extraordinaire for romantic liaisons.

“I get more play from women than men,” says Dwight, who recently celebrated his fiftieth birthday with a circus theme and male and female models to escort him through the room. “I can’t get a date with a man, but the women are knocking my doors down. They just love you when you can be real about who you are.”

Critics are convinced this wedding announcement from Eubanks is nothing more than a publicity stunt to garner attention for his upcoming Bravo reality show. And as expected tons of angry black women and the “God they speak for” are letting Eubanks and his wife- to -be have it on Essence’s message board.

Dwight shares he is completely honest with his fiance’ about his sexuality.

“It’s really interesting because the men are so standoffish, but the women don’t care,” says Dwight. “Most of the men around here are gay, lying to their wives, slipping and dipping and all that, but it is what it is. You have to enjoy life, and that’s what I am doing.”

But if Eubanks is indeed a true bisexual man could he be sending the wrong message to millions about the lives of a misunderstood minority?