Dwight Eubanks on fashion, fun and the future 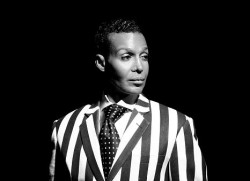 The second season of “The Real Housewives of Atlanta” has wrapped, but the indefatigable Dwight Eubanks carries on. He’s over the top, flamboyant and unapologetic, and that’s why we love him so.

Eubanks enjoys the spotlight, opening his eclectic home for photos, dishing that he’s bi and engaged, attending gay fundraisers or swatting down his “sixth housewife” moniker. Now, Connect magazine caught up with Eubanks and true to form, he holds nothing back. He even offers a few tidbits that fly in the face of his Bravo-created TV persona.

Here’s what Eubanks has to say on fashion:

Dwight goes on to talk about how fashion doesn’t begin in America; it begins in Europe with designers like Galliano, Givenchy, Gaultier and Thierry Mugler. “That’s why I don’t live in Europe or New York because I would lose my mind. Honey, I would hit some little lady in the head for a pair of shoes. I can’t live without it.”

Frustrated by the lack of fashion sense he thinks men have here in Atlanta, Dwight is appalled when he goes to a church or funeral to see them sitting with their hats on which shows no respect in his opinion. He turns his attention to great fashion examples such as the Karl Lagerfeld collar. “I love that,” he says, “I love men looking like men and dressing like gentlemen.” One of Dwight’s favorite movies was about the life of writer Oscar Wilde in the 1800’s. In his opinion, Wilde’s fashion sense was amazing and over the top, loving everything including the cutaway jackets, top hats and sometimes ruffles, walking sticks and capes for the morning. “See, that’s fashion sense. Do I have some capes in my closet? Absolutely!”

Acknowledging his blessings, Dwight still mentions that there is a lot to be done and the list is endless. His dreams are to franchise Purple Door Salons all over the world, open a learning institution in Paris for beauty and makeup, launch his fashion line “The Tool Box Collection” and create business ventures in Dubai: “My Whitman’s smoking jackets and bath robes are like nothing you’ve ever seen.” Also, Eubanks plans on penning a book on his life: “There are some things I want to get out from my past because I want to tell my story before anyone else tells it.” He also wants to open a gay and lesbian center geared towards getting teens off the streets.

R&R for Dwight is not doing anything: “I just sit on my sofa and eat fried chicken, collard greens, macaroni and cheese, potato salad, sweet potato pie and go from the couch to the refrigerator.” If he is not doing that, he is traveling to some of his favorite destinations like Dubai, Paris or closer to home, like Nashville for its great history or Savannah for the seafood.

On things you may not know about him:

Dwight definitely surprised me by announcing that he loves the outdoors. He likes to cut the grass, build things and do construction. He has a fondness for animals and particularly riding horses. “People don’t see that side of me,” mentioned Dwight, proving that there is more to this Atlanta fashionista than what you see on the television.